A Peace of Yarn

Christmas was in the air.  Holiday lights twinkled in the dark night, a chill merited coats and hats (not always required in December in the Carolinas), and at least half of my family was plagued with some sort of nasty wracking cough.  It was 2008, I was 44, and I had just finished my first semester of teaching at a new high school.  I had the typical end-of-semester bone-tired weariness—a product of weeks and weeks of intense grading, dealing with a variety of teen personalities on a daily basis, and tying up the hundreds of loose ends that are part of the end of an academic term.
My family and I had just exited our car and were headed to a faculty get-together at a bar/restaurant located in a quaint strip of shops in a neighboring town.  As I walked along the sidewalk, I noticed a lit-up storefront with knitted goods in the window. Completely intrigued, I peered in and saw a quiet hum of movement—there were still a few women in the shop, even though it was nearly closing time—and I longed to go in, but knew that my two sons would have been antsy and impatient and that their incessant whining and complaining would have ruined the experience.  I also didn’t want to be late for dinner, so I filed away the information that I needed to return to visit the shop and went in to join my colleagues.
When I woke the next morning, thoughts of the yarn shop filled my brain.  I can recall a similar experience when I visited Las Vegas years ago and rose suddenly from deep sleep, sitting straight up in bed at around 4:30 or 5:00 a.m.  The knowledge that there was so much excitement and opportunity for both stimulation and riches located just a mere distance of several floors beneath my room was too much to bear.  I dressed in the dark and slipped quietly out of the room to go downstairs to the casino floor.  The siren call of Vegas twenty-one tables, however, have nothing over the pull of yarn in my life since my first glance at that plate glass of the yarn shop that fateful night.
Mall stores spend big bucks on creating environments that appeal to the senses of shoppers—a mixture of music, scent, color, and use of space that unleashes purse strings.  But the heady environment of the first floor of Nordstrom's or Neiman Marcus can’t compare to the sensory delights of a knitting store—delights that I first experienced that fateful Saturday morning.  I think I handled every piece of yarn in the shop and, ultimately, left with a paper-back booklet of knitting instructions, a couple of skeins of beautiful dappled gray-black-and-white wool, and a set of size-ten circular bamboo needles. The women who worked in the shop had offered helpful advice and suggestions, and they seemed to me like members of some secret society, one which had complicated manuals and initiation rites, but which promised a kind of graceful composure and peace for those worthy to accept the challenge.
I bore the bag they handed me with its mysterious contents like some holy offering.  After I arrived home, with the help of the proffered advice, the booklet, and online videos, I was able to make a scarf and then a hat and a scarf and then another scarf and another hat and another scarf and then . . .  Pilgrimages to yarn shops became a part of every family vacation and knitting is now ensconced in my daily routine.  Fittingly, that first yarn shop, one which closed its doors not long after my first foray into the wonders of knitting, was called “A Peace of Yarn”—as knitting has served me as both a meditative exercise and an escape as a teacher from the increasing demands of the monolithic bureaucracy that is the North Carolina educational system.
Ironically, despite the calm joy that knitting has brought to my life, my ten-year-old son likes to state periodically, “Knitting makes you mean.”   I am humbled and ashamed by his words, as I know they refer to the unfortunate but, ultimately, successful cabled sweater dress (replete with bobble upon bobble upon bobble) that I took on as a novice knitter—swearing and ripping and swearing and ripping along the way.  (The accompanying glasses of merlot didn’t help matters much.)  “It’s the eleventh row!!!!” I would shriek hysterically when he would open the door to the bedroom where I sat enthroned, propped up with a pile of pillows behind me on the bed.  I ripped and tore my way through that dress with its antagonistic eleventh bobble row—the one that I had to tear out every time for weeks upon end.
But now as I wear my cable dress to work during this unusually cold winter (and bask in the ego boosting that accompanies the words, “Why, yes.  I did make it myself”) and find bobbles to be little challenge at all, I like to think that it is appropriate that I was introduced to knitting during the season of promise and peace.  That first piece of yarn has led to more time spent at home before the fire, less focus on material possessions, and the sense that just because a person is middle-aged, it doesn’t mean that her life can’t change, can’t be infused with new possibilities and positive challenges, all due to one serendipitous moment. 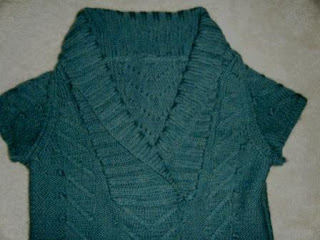 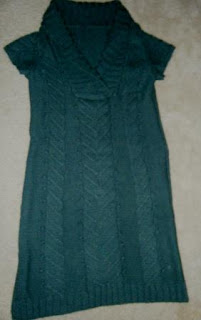 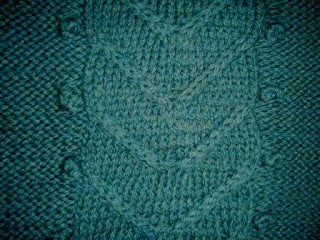 I felt like Sisyphus as I ripped and knit my way through this sweater dress, but the effort was worth it.  The pattern is available in a booklet from Paton's Classic Wool entitled "Fall in Love" (500864 CC).  I purchased the booklet after I searched online for sweater dresses and found it available through Mary Maxim.
Email Post