Mist coming over the mountains, torches illuminating the darkness, accompanied by the booming voices of brave Scottish clan leaders, boasting of the valor associated with their families.  What romantic wouldn’t be inspired by this experience—his or her mind reveling in the sensory images and experiencing nostalgia for times never experienced individually, but, perhaps, still present as part of some collective cultural memory?
The opening night ceremonies of the Highland Games at Grandfather Mountain kicked off three days of food, music, competition, shopping, and exhibits that celebrate Scottish culture.  My husband, two sons, and I made our first visit to the games this past July.  There we were able to learn some family history, listen to some rousing Celtic music—formal and traditional and also modern and eclectic (one Celtic rock group featured a didgeridoo), and enjoy the exhibits and shopping.  My ten-year-old was so enamored of the weaponry that he now possesses a stainless steel sword (taller than he is) that he proudly brandishes and strokes lovingly while watching Lord of the Rings DVDs.
While the festival offered much for my sons and other fans of Braveheart and those interested in observing brawny men in kilts (I'm ashamed to say I'm included in the latter group), it also provided fare for fiber enthusiasts.  There was not only an array of tartans and sashes for sale representing the different clans, there was also a demonstration of spinning and some vendors who sold yarn and jewelry related to fiber crafts.  At the time of the games, I had one hour of spinning instruction under my belt, so I was thrilled to watch a woman from the Thistle Studio demonstrate the craft.  She was even kind enough to let me step behind the table at her booth so that I could get some pointers about using a wheel.  She also sold hand-knitted socks, handspun fiber, and beautiful jewelry with Christian and Celtic symbolism.  I think the helpful spinner was Marjorie Warren, the owner of Thistle Studio, but it’s been some time since my visit and I wasn’t planning on blogging about this experience when I attended the games, so I’m not sure.  While looking for information about her, I found a link to an organization with which Thistle Studio is affiliated and with which I am unfamiliar—seems to be a great resource for Carolinians interested in fiber crafts:  http://www.sefiberforum.org/index.html.  Another lady was at the same booth, representing Celtic Women International http://www.celticwomen.org/tartan.htm.  She demonstrated hand weaving and had machine-made sashes that were created from an original design she had hand woven for her organization.  I longingly handled the sashes for sale, but after spending the bulk of my cash on weaponry and on innumerable trips to food vendors to purchase greasy sustenance for my two stocky boys, I put off the purchase for another day.  Maybe next year?
Anyway, while the games aren’t geared for the fiber enthusiast, they did offer me a fiber fix and a respite from a rather testosterone-laden weekend.

Go to http://www.gmhg.org/ for more information. 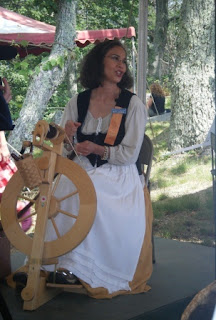 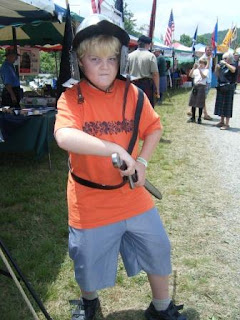 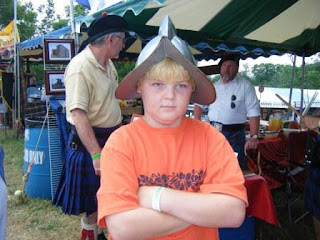