“Why am I tormenting myself during summer break?"  I asked my husband a couple of days ago.  "Peasant women in third world countries go blind doing this in order to feed their families.”  I'd just spent more than two exasperating hours in an attempt to work the first few rows of a medallion--a component of a sleeveless tunic.  To start this garment, I had to learn to work the circular cast on illustrated on the same page as the pattern in the summer 2014 issue of Knitter's Magazine. This task entails making a loose loop, knitting stitches into it, and then—magically—pulling the tail to create a neat, tight circle.  I did eventually execute the cast-on (after finding an alternate technique on YouTube) and knit the first row, but I then erred on the second one, a row which required left and right increases.  Wielding four little sticks while fumbling with an intrusive loop as I tried to figure out the ins and outs of an increase technique with which I was unfamiliar was overwhelming.  I tore out my work and repeated this process several times.  Tired, I was tempted to quit but soldiered on.

My husband and I had a similar experience yesterday.  Let me note that this hasn’t been a great summer for us.  I am at the point where I feel I’m on the brink, tasting a bit of future freedom and time to reconnect with my husband as my children approach becoming independent.  My older son just turned seventeen, and the youngest is fourteen.  But it seems that it is more difficult now than it was a couple of years ago to bond as a couple.  Dennis and I are hesitant to leave our home together for more than a couple of hours at a time (as teenagers are a bit unpredictable), and the boys are just too big for a babysitter.  In addition, we don’t have any unwitting friends or relatives who might be willing to stay at our house to monitor things and to deal with a cocksure seventeen-year-old and his entourage of buddies. Nor do my spouse and I have any exciting independent trips to distract us this summer, so it's day after day of doing football laundry and cleaning up sticky peanut butter from spoons and plates and counters. (Protein is an athletic staple and peanut butter is a good source.) 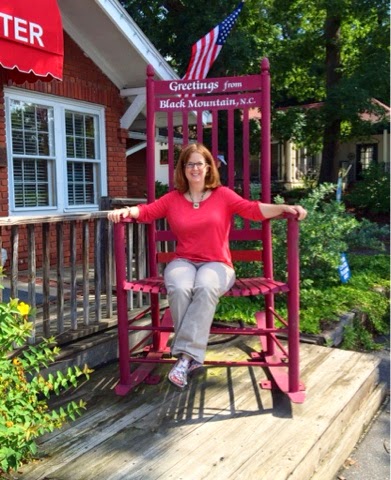 But my husband and I made a plan.  We would take a day trip.  We would wake up early (when the boys were still sleeping), drive to a charming mountain hamlet, and there enjoy a pleasant meal and maybe a stroll.  Our older son would wake up and have to go to his life guarding job, so he would be kept occupied, and the younger would be content to stay home alone and play video games for a few hours after his noontime rising.  The first part of the day met our expectations.  We took a two-and-a-half-hour ride to Black Mountain, where we perused shops and galleries and where I was finally able to explore the Black Mountain Yarn Shop (see last blog post for details).  We also ate a meal at a restaurant named Veranda, and I was proud of myself for not overindulging.  The food was fresh and homemade and seasoned well, and, dining al fresco, we enjoyed a pleasant breeze.


After lunch, we went to a used bookstore, where I saw a woman, maybe in her sixties, clutching a Black Mountain Yarn Shop bag and perusing the knitting books.  Naturally, I wanted to look in the same section, but the knitting books were located in a tight corner, so I kept hanging back, waiting, hoping I wasn’t making this individual too uncomfortable.  We finally struck up a conversation, and I asked her if she knew any hiking paths.  She suggested Lookout Trail, located in Montreat.  This retreat center was founded by a Congregationalist minister, but now has a Presbyterian affiliation.  Montreat reminded me a bit a Chatauqua, New York or Ocean Grove, New Jersey—as these places were all 19th century summer colonies affiliated with various Protestant denominations.  Many of the homes in these communities are still owned by descendants of original summer residents.

After parking the car and entering the trail, I noticed that the few hikers we saw were dressed quit sportily—solid shoes, walking sticks, nylon shorts, backpacks, etc., while my husband was wearing a polo shirt and trousers, and I had on long pants, sandals, and fairly nice cotton shirt.  My husband, who has chronic asthma, had also forgotten to bring his inhaler.  But the lady in the bookstore had told me that the hike was “easy,” although she did caution that it might take us the entire afternoon.

Let’s just say that we never anticipated huffing and puffing and scaling and struggling over steep, uneven terrain.  Nor did we imagine that, at the end of the wooded trail, we found that in order to reach the summit, we would have to clamber up roughly twelve feet of craggy rocks.  Staring up at this intimidating sight, I was ready to turn back, as I was frightened and also concerned about Dennis, who was lagging behind with a red face and sweat-stained shirt.  But two women hikers ahead of us led the way, and I think either their inspiration  or Dennis’s male ego encouraged him to prevail.  I felt a bit guilty, as I am short and, therefore, have a low center of gravity and, despite my initial hesitation, was able to scamper up the final rocky crevice with the diminutive ease of Bilbo Baggins, while lanky Dennis stumbled over his size 13 feet (which were clad in deck shoes unsuitable for hiking).  He made it, though.

At the narrow, rocky expanse on the top, Dennis and I got to know our fellow hikers, Gail, a photographer from Pawley’s Island, and Kit, who owns a house in Montreat along with rental properties in Charleston, SC and its environs.    Gail informed us that her sixteen-year-old daughter, along with her friend, had climbed this same mountain the day before, and, on the spot where we were standing, had come face-to-face with an enormous black bear!   They’d spent thirty hysterical, screaming minutes on the phone with 911, pleading for a helicopter to take them out, as they were afraid to go into the woods again, where they might re-encounter their hairy companion.  (Ultimately rangers walked up the mountain and led the girls down.) Listening to this harrowing account, I was thankful that Dennis and I were not alone on the mountaintop and tried not to think about bears—or copperhead snakes, for that matter.

While we enjoyed the view, we were joined by an athletic couple with three elementary-school-aged children, two boys and a girl.  The mother informed us that she is a high school principal in Florida and told us that she was a bit preoccupied as she needed to hire a third-grade teacher for the coming school year.  I was impressed by this woman, her relaxed husband, and their well-behaved children.  When my boys  were younger, I would have been panicking if I’d found myself  on the top of a mountain with them, as they would most certainly have displayed hyper, exuberant, daredevil behavior.  I still shudder when I think about trying to reign in Jonathan and James after we'd ascended the steps of a lighthouse in Chappaquiddick, Massachusetts.  At the time, I was trying to dodge two dangers—having my children burn themselves on a giant light bulb in the cramped chamber where they frolicked, oblivious to danger, or fall through boy-sized gaps in the rungs of the railing around the ledge outside, a place where they were hankering to go.  I had to force myself not to hyperventilate as I desperately clutched wriggling arms as my boys struggled to get free.    But the children in the family we'd encountered sat quietly.

The mountain sounds are relaxing.

A mountaintop is an odd place for socializing, but we all seemed to enjoy chatting.  Next, Dennis and I, led by the two women we'd met, took a different path down the mountain, one that Kit, who was tall and athletic, had discovered the day before.  The terrain was fascinating and gorgeous—and we enjoyed lots of it, probably two hours’ worth.  Rocky lairs, mossy trunks, beds of ferns, water playing over rocks all stimulated our weary senses. 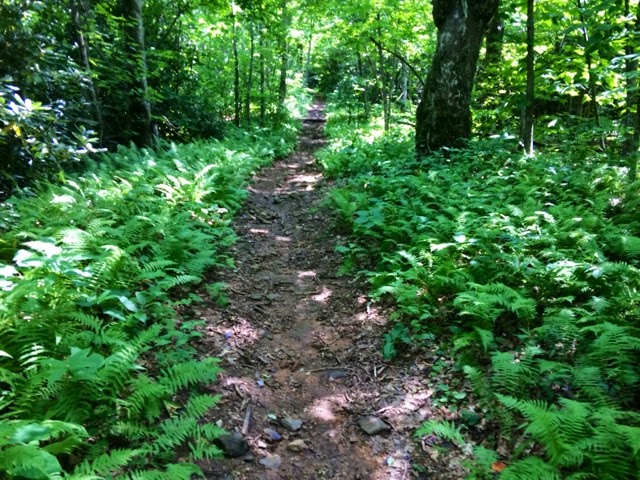 As we approached the base, we met a young girl, maybe fourteen, who informed us that she has asthma and that she’d started to climb up with her friends, but the walk was too much for her, so she was sitting patiently, catching her breath, waiting for them to come back down.  I have to say that her words gave me a new appreciation for my husband’s efforts.

When we finally emerged from the trail, I exchanged names and contact information with our new friends and hoped that Dennis would recover from this experience unscathed.  His mouth was hanging open, and his eyes wearily looked out of his sweaty red face.  I drove the car to an ice cream shop, where I sat down at a table and devoured a salted caramel ice cream in a waffle cone.  Dennis initially sat in the car but finally staggered in, eliciting some odd looks from the customers.  He drank a root beer and then we headed back home.

We’re a bit achy today, but we can say we accomplished something.  Dennis, who at one time was a youth minister assigned to camp counselor duty, taking teenagers on eleven-mile treks in the mountains, told me  that yesterday’s hike was the most difficult he’d ever experienced.  So he has achieved a personal best.  Me, too.  I managed to execute the tricky circular cast on and now have worked 12 or so rows of the first medallion for my tunic.  (I did use an instructional YouTube video which taught me an easier circular cast-on method using a crochet hook, though.)  I’m also invigorated by yesterday’s climb and anticipating more summer days spent tackling new challenges—knitting and otherwise. 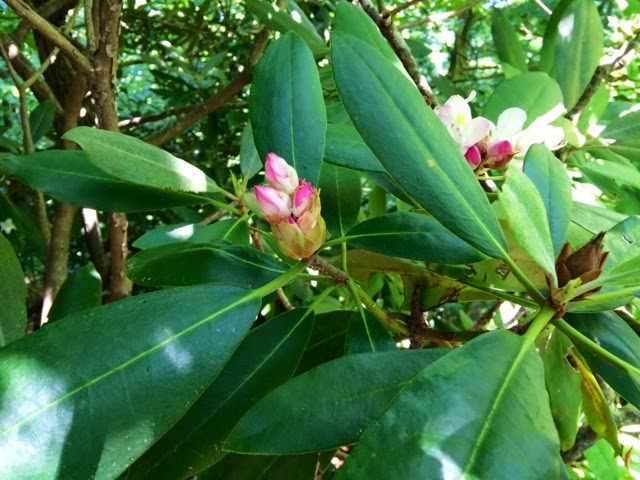 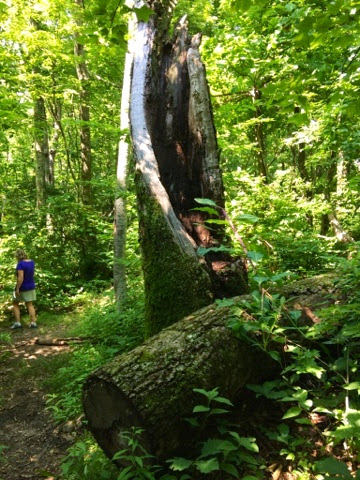