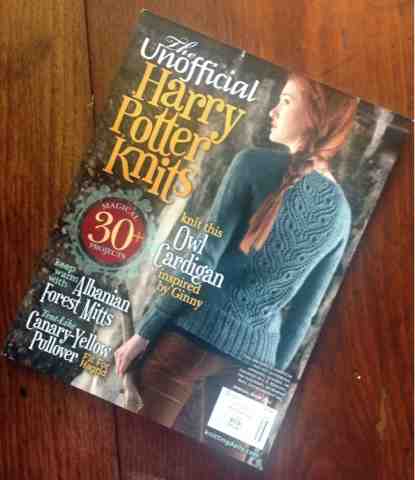 "By the pricking of my thumbs.  Something wicked this way comes."

When I recently saw a picture of the new Harry Potter Knits magazine posted on Facebook by some distant yarn shop, I knew I would have to buy this publication.  So on a recent trip to Cottage Yarn, I was thrilled to see a stack of glossy, inviting copies  for sale.  I need to take a break from buying yarn for a while, as I have one too many projects cast on and don't want to leave any of them lifelessly lingering or abandoned forever, but I view magazines and books as valuable additions to a library, and a knitting magazine related to Harry Potter was too irresistible to ignore.

At my age I am not in the habit of reading a great deal of children's literature, although I loved having an excuse to read aloud some of favorite, albeit none-too-girlie, titles to my boys when they were little.  But I've always been an enthusiastic adult Harry Potter fan.  As a child I loved stories set in boarding schools, so this series appeals to  this previous fascination and, as a teacher, these books often offer a satirical, albeit allegorical, look at education. (Regular readers of my blog also already know my adoration for British literature.)  But aside from these areas of affinity, the magic, so desperately needed in our mundane lives, has to be a primary source of attraction for me and other Potter fans. 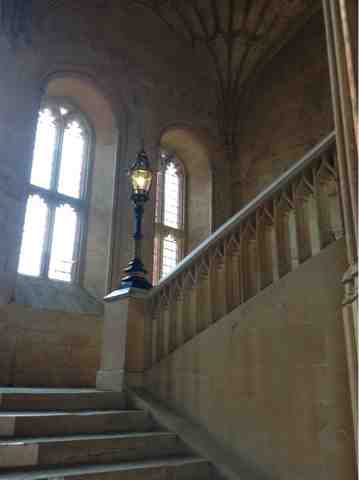 When the books came out there was controversy here in the Bible Belt.  Some of my high school students (not a majority but a significant minority)  were and still are not allowed to read the books or watch the films because they deal with magic.  One of my son's friends back in elementary school was forbidden to read of view anything Harry Potter, but strangely enough played violent level "M" (for mature) video games as a fifth grader and was allowed to watch The Lord of the Rings, where Gandalf the magician plays such a prominent role.  Anyway, I don't really understand what sets the Potter books and films apart from so many other stories, where magic plays a role, and don't intend to examine that issue here, except to say that the massive popular appeal of these works may have something to do with the objections to them.

I do have to concede that the Harry Potter films and books do deal with a scary dark evil foe whose depiction on film is, indeed, not suitable for younger audiences.  I learned this lesson the hard way when I allowed my then seven-year-old son Jonathan to view The Sorcerer's Stone, a decision which resulted in nightmares that prevented him (and his parents!) from sleeping through a full night until Jonathan reached his teenaged years.  The images of Voldemort's macabre face, which is unveiled near the end of the film, prompted some awful nightmares (from which Jonathan arose screaming and jumping to the floor with a loud thud).  While this experience is a supreme example of a parenting mistake that will haunt me forever, it still does not dissuade from my appreciation for Rowling's works.  The magic in the stories is presented in so whimsical, charming, and clever a manner and the stories offer such a moral message about self-sacrifice and unconditional love that I find them irresistible, and I can't imagine forbidding older children to read them or to view the films.

So my pleasure is doubled:  Harry Potter . . . and knitting.  Together!  There are some beautiful patterns in this magazine--including those for an ethereal cape and a cabled men's canary sweater, but the owl cardigan shown on the cover is an item I intend to cast on soon.  I have some worsted weight wool that I dyed with blueberries last summer, and I have been stymied as to what to do with it.  Somehow this yarn seems suitable for this project, as its hue is the result of boiling concoctions in large pots after much measuring and weighing of chemicals and berries, and while I'm not a witch (although the high school students in my English classes might beg to differ) my soft earth-hued yarn seems to me to be the product of some weird process--not alchemical--but close enough. 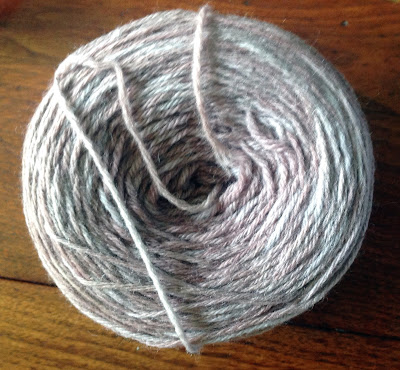 Anyway, I refuse to put needles to this purple-gray yarn until I finish my Midsummer Aran--the red/rust colored sweater (discussed here) that indeed seems magical--as it a garment whose creation must be governed my mischievous bad sorcerers who trip me up at every turn.    Yesterday, I tore out an entire sleeve, yes, an entire sleeve, because, once again, I'd misread the pattern.  (When knitting in the round, remember to read all chart rows from right to left!)  I refuse to be conquered, though, and hope that my Harry Potter inspired cardigan project, when I begin it,  brings with it good magic back to my knitting experience. 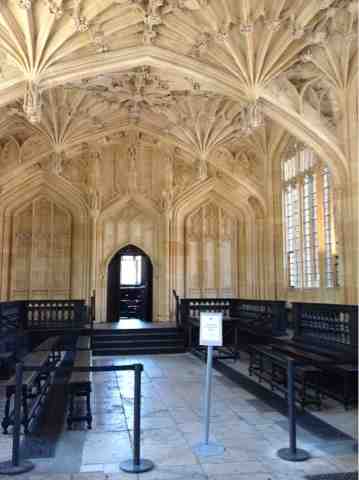