3KCBWDAY5 The Ruin of the Lace

(an Heroi-Comical Poem in honor of Alexander Pope) 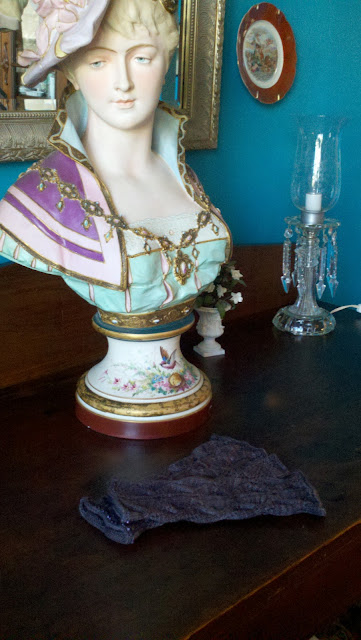 What messy tangle from sleepy knitting springs,
What ire and weariness rise from yarny things?
Say, what rash act could create such a sorry sight?
What lack of foresight could create this fright?
In tasks so complex foolish women engage,
With no heed to prudence, ending with mighty rage.

Fair Elizabeth eyed the skeins so rich and soft,
Picked them off the shelf and held them aloft.
"This soft lace fiber by ethereal fairies spun,
So fine, so gossamer, to knit will be such fun,”
Said our poor naïve gentle belle so sweet,
As she stood at the register, her sale to complete.

On Friday eve, after a work week most chaotic,
Elizabeth picked up the yarns from climes exotic.
She wielded her sharp duo of weapons bright,
Used them to cast on, in the dim evening light.
A glass of wine, a gift of the gods, by her side,
Elizabeth carefully her two needles plied.


Naughty sprites piqued by Elizabeth’s beauty fair,
Perched o’er her shoulder on the easy chair,
And made the  thin fiber began to dance,
Slipping and sliding, a dire mischance.
But to her aid, a tender fairy, a guardian brave,
Caused the yarn ball to drop and the curtain to wave.

But our heroine ignored the gentle alarm,
Continued to knit, heedless of coming harm.
For the impish sprites would make come to pass,
Frantic frogging on the part of our gentle lass,
Who innocent plodded on in her cursed course,
A vision of a pair of lacy mitts, a potent urging force.


Five inches into the labor, the lace didn’t match,
No needed loop to marry a stitch in a perfect match,
No two to knit together, so intimate to grow
So perfectly partnered to maintain count of the row.
Elizabeth sighed and drank a swallow of wine,
Then intoned, “What will become of this project of mine?”

Once so confident, so smug, her aim so intent,
Our fine maiden had now a terrible sin to repent.
Such rashness, such conceit, such downright pride
Had been the cause of this humiliating ride.
She’d forgone a helpmate, and now must repine,
For she lacked a backing, a support, a life line.


She tore and she cursed and from her goblet did drink,
Till Sol through the curtains into the darkness winked
With his bright rays of morning, so harsh and so bright,
Lighting on poor Elizabeth, an alarming sight,
Surrounded by squiggles of impossible string,
There was nothing, no solace her efforts could bring.

Her guardian angel summoned her to her silent bed
Sending a morning-dream to hover o’er her head;
Lacy gloves to wear to an afternoon tea,
In a fine British manor filled her morning reverie.
And while our maid slumbered so deep and without care,
To her aid came a thousand bright inhabitants of Air!


These minute creatures, so airy, at such a pace,
Danced and maneuvered the delicate lace,
Whirling and diving, under and over, knit and purl,
To the eye, the fairies were mere light, a whirling swirl.
These fine fairy helpers the gloves did create.
Two perfect mirrors, each a match for its mate. 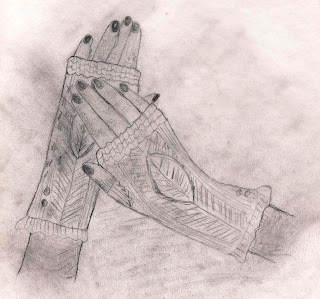 The naughty sprites while this happens turn to flame,
And mount up to the skies; the fairies’ goodness ends their game.
Elizabeth wakes and stretches in the sun’s oblique ray,
Smiles and then remembers the night, and is stricken with dismay,
But her melancholy soon expires as she glances apace,
Sees the gift of the fairies atop her vanity, a fitting place.


“Thank you spirits of knitting, of needles, of yarn,
For saving me from unendurable harm;
From this low point onward, I will go forth,
Remembering lifelines and their inestimable worth,”
Elizabeth asserted, as she poured some sugar and coffee and cream,
Picked up her knitting bag and thought wistfully of her dream.
Email Post
Labels: 3KCBWDay5