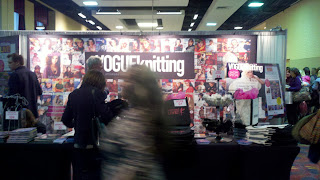 “The great thing about getting older is that you don't lose all the other ages you've been.”
― Madeleine L'Engle


Ebeneezer Scrooge heard the rattle of Marley’s chains to signal him that he would be haunted by his past.  While I eagerly packed for an anticipated first-time trip to Vogue Knitting Live, I also was faced with a ghost, not a literal one in fetters, but a more figurative one that arrived in the form of a bittersweet sense that I would be coming face to face with my own history.  I was traveling to the city I’d explored as a teenager on visits to my Manhattan-dwelling father, the city where, in my early twenties, I worked  in publishing and then left to pursue a teaching career in North Carolina, and the city to which I hadn’t returned until now--17 years later.  Over the years, traveling there had always seemed prohibitively expensive and impractical, but my passion for all things knitting was ultimately the impetus that removed these obstacles from my consideration. Hence, here is part one of a two-part post presenting highlights not only from my trip to Vogue Knitting Live but also down memory lane.
Friday, January 13
I was set to teach school all day, and then leave for the airport to catch an evening plane to New York, but I received a call that morning, stating that my flight was cancelled.  Rather than accept the flight offered to me on Saturday, I agreed to fly to snowy Chicago in the afternoon and from there on to NYC.  When I finally arrived at Laguardia—after de-icing delays and one missed flight and a combined nearly 11 hours of travel time—I was delirious with exhaustion, partially due to the fact that my diet the entire day had consisted of Diet Cokes and a small bag of overpriced airline nuts.  Wanting to save my money for the pleasures of yarn purchases, though, I chose to take a local bus to Manhattan and then switch to the subway over paying for an expensive cab ride.

When the dark bus filled with shadowy figures in equally dark over-sized coats, this tired now North Carolina girl felt a bit like an epic hero on the part of his quest where he must travel to the netherworld (in my case, in search of yarn rather than self-knowledge or fame).  My trip on the local bus through Harlem, though, turned out not to be like some frightening voyage to the Underworld, but, rather, a fascinating experience, one where I was able to soak up some local atmosphere.  One man in his fifties or sixties got on the bus, took a seat behind me, and proceeded to make several booty calls (excuse the slangy diction) to different women.  This guy’s slickness was impressive—he even remembered to wish one of them a happy birthday, before asking her to join him that evening.  His seasoned pitches were hilarious, and my conversation with another jovial older man (whose ragged appearance could not entirely hide the vestiges of what must once have been a very handsome face) made me thankful that I hadn’t returned to my old stomping grounds merely as a tourist but, had rather, seized an opportunity to interact with real New Yorkers.  When I grabbed the subway near Columbia University, I was also able to appreciate some impressive 19th century architecture and still-lit holiday lights.
After checking in, a quick $15.00 glass of house wine at the Hilton bar (I knew I was in NY then), and a walk to a nearby grocery store for some provisions, I worked on a hat using a free Viveca pattern from Berrocco and then went to sleep around midnight.


Saturday, January 14
Exhausted, but too hyped up to go back to sleep after I woke up at 5:00 a.m., I worked on my hat for a while, and then joined the already long line of knitters formed in front of the Starbucks in the lobby before its opening time of 7:00 a.m.  Fueled by caffeine, I was ready to participate in the mad rush when the Marketplace opened at 9:00 a.m. and immediately received my early bird rewards:  a free book, entitled Comfort Knitting and Crochet Afghans and a bag of other goodies from Berrocco, by agreeing to try on one of their samples for fit.  I also purchased a Vogue Knitting Live tote bag from the magazine’s booth and then proceeded to enjoy shopping and viewing the exhibits until lecture time.

Jo Packham’s lecture at 10:30 was inspiring.  She is a 35-year veteran of the publishing industry, one whose storied career, including producing her brainchild Where Women Create, attests to the fact that stick-with-it-ness is probably the most important criterion to success.  Her insights into getting one’s work published and making a name for oneself as a designer were particularly inspiring to me as I aim for a future career related to my love of knitting.  Her talk also made me wistful for my own time spent working in the industry.

After lunch at a French restaurant a few blocks away, I was rejuvenated for more Marketplace shopping, and viewing a fashion show with witty Maggie Jackson showing off her latest Maggiknits designs.    I then met a friend from Massachusetts who came down to spend the night in the city.  I hadn't seen her in nearly a decade.  Her appearance, due to a recent bout with cancer, was  altered, a sobering reminder of years elapsed since we were college girls.  I bolstered my maudlin thoughts about the rapid passage of time with the anticipation of an evening out, though, and we headed downtown on the subway to Sheridan Square.  After an amazingly inexpensive meal in the Village, we sought out Marie’s Crisis, a place my parents used to go back in the fifties, and where my father had taken me when I was in high school.  Barely bigger than the den in my modest suburban home, this piano bar filled with lively and talented customers and staff who sing along to show tunes.  After joining in rousing renditions of numbers such as “One More Day” and “On the Street Where You Live,” my joyful exhilaration (Yes, I am back!) was tinged with remembrances of this nightspot that brought to light the transience of my experiences.


I went to bed much too late, looking forward to a morning class with Debbie Bliss.

Look for Part II Tomorrow:  "Lost Love and Vogue Knitting Live" (where I meet Debbie Bliss and have dinner with an old flame)
Email Post