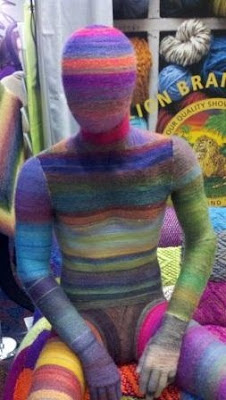 "Footfalls echo[ed] in the memory/ Down the passage which we did not take/Towards the door we never opened."
-T.S. Eliot
Sunday


Bleary eyed after waking much too early after a late night out, I headed to the café in the lobby, where a friendly Vogue Knitting volunteer chatted with me.  She had an extra ticket for a free continental breakfast and treated me to a meal.  What a nice person and fearless, too.  Recently divorced and 48 years old, she plans to obtain a teaching job—in Brooklyn no less—even though she hasn’t been in the classroom for over 25 years.

After a quick lunch, the friend who’d visited me from Massachusetts headed home, and I returned to the Marketplace, where I bought a very reasonable priced kit from Black Sheep and Ewe to make a scarf with Noro yarn.  I saw a bit of a fashion show of Skacel knitwear, too.  Thoroughly tired, and with a frightening realization that I might not have room in my already stuffed carry on bag for my purchases, I then took a break at the Beginner Lounge.  Even though I’m not technically a novice, I was invited by a friendly woman manning a table to sit down and work with some yarn.  Later, Vickie Howell herself came over with a friendly smile and told me to take the yarn and the needles I was working with home with me.  I was also able to listen to most of a panel discussion given by important women who work in the knitting industry.  The owner of Jimmy Beans wool and  Debbie Stoller were among the panelists.
<><><><><><><><><><><><><><><><><> <> <><><><><><><><><><><><><><><><><> <> <><><><><><><><><><><><><><><><><> <> <><><><><><><><><><><><><><><><><> <>
Finally, I headed back to my room to face a challenge of the weekend not related to knitting:  preparing for dinner with an old flame I hadn’t seen in 25 years.  After applying every concoction I could find to add moisture to my skin and hair, I put on make-up and a dress and heels.  I was probably a little overdone, but if this weekend was an epic quest, then I, the hero, I was in need of protective armor.
I first met this man when I was a junior in college.  He was a good-looking, sharp-witted student at a prestigious university who sometimes went by the nickname "The Saint" (a character in a TV show by the same name that starred Roger Moore).  When I first laid eyes on him, my response was visceral.  I was Lavender Brown gooey-eyed over Ron Weasley, or credulous Bridget Jones falling for smooth Daniel Cleaver (over and over).  Marrianne Dashwood also comes to mind when I reflect on my unbridled enthusiasm for this guy.  When I called a drama teacher friend and talked about my this relationship, she responded by reciting love-sick Helena’s words to Demetrius in A Midsummer Night’s Dream:  “I am your spaniel.”  If you know anything about spaniels (and I do because I own a cocker spaniel) they are unwavering in their loyalty to one master, displaying a devotion that verges on obsession.  Many spaniel owners feel as if they have an extra appendage, one which happens to have soulful eyes.
This guy is an attorney now and has been married for twenty years.  (I've been married for 17.) He'd contacted me a couple of years ago, and we'd exchanged pictures of our kids and some short correspondence.  When we shared our reunion dinner together, after 25 years, he told me that he was sorry for his previous callous treatment of me, and I assured him that I was probably equally culpable in forging our skewed prior relationship.

I won't share all that we talked about, but at one point his conversation did compel me to discuss with him the rewards of fulfilling one’s duty and following the “narrow path” in life.   I talked candidly to my seventy-one-year-old mother on the phone the next day, and her words reflected the practical dispassion of time and experience that I have yet to achieve.  After hearing a recap of my evening, she said, “He sounds like a brat, but I always liked bad boys, too.”


My much-anticipated dinner ended in fact so early that I was able to return to my hotel room to watch Downton Abbey on PBS. I’m not certain that coming home at the perfect time to watch Lady Mary’s silent suffering over the fact that her love Matthew Crawley is engaged to someone else was exactly a serendipitous coincidence, but the program did remind me that human experiences of the heart are universal. As I sat knitting my hat and watching television, I still couldn't help but mourn the loss of the blind romantic faith of my girlhood.