It seems fitting that when I arrived in London two days before I was scheduled to travel to Oxford for a week-long seminar dealing with two novels by Charles Dickens--Bleak House and Oliver Twist--that I found myself like so many of this author's characters, wandering forlornly about the city sorely lacking basic necessities, sporting a dirty shirt and wrinkled pants striped with grime about the cuffs.   Not an auspicious start to a journey.

I'd planned carefully, and on July 4, after much angsting about considerations such as the wisdom of packing three different pairs of black shoes, I flew to England via Miami.  Arriving in London tired but wired with anticipation, I learned that my my luggage had not arrived.  I also experienced some serious technical difficulties with an apparently ancient and anachronistic international cell phone (a loaner from Verizon), but won't bore my readers with a lengthy and tedious recounting of the hours and hours I spent troubleshooting, both before and during my trip.  Let's just say that phone cards are a much better option for overseas travel.

I am an independent person and previously had been energized at the thought of taking off solo for parts unknown.  The bag issue unnerved me a bit,  but I attempted to remain optimistic that the missing item would be delivered to my hotel that night or the next morning at the latest.  Before modern bar codes and the Internet, I'd seen and heard how the airlines were efficient about getting missing luggage out to people overnight.

I should have known, however, that, in our modern technologically advanced age, sorting out the suitcase mess would not be so simple, as I'd experienced some ominous forebodings on the plane.  There, while attempting to work on a cabled circular designed sweater (an item I'd already ripped out about a hundred times due to a misreading of the chart and some sloppy errors), I found that I had a bunch of mistakes and had to tear out about five rows (204 stitches in each row) and then caught the tail somehow on some metal hardware that was a part of my seat and had to roughly rip to separate my so-called sweater from the the seat.  Not a good sign.

But ignoring any inauspicious omens (hope waxes eternal), when I arrived at Heathrow I filled out a missing bag report and navigated to my hotel. I then went out to explore the city and found myself sweltering with the groundlings at the Globe theatre watching a production of Macbeth.   After one of the teenagers students in the throng pressed around me fainted, I decided that I might to serious damage to my health by staying past  the intermission, as I'd had little sleep and my plastic clogs (the only shoes I had with me) were causing my feet to ache.  I couldn't bear the thought of wearing my grubby shirt any longer so set out on a quest for a new top and, after seemingly miles and miles and miles of walking, I found a simple cotton shirt at an outrageous price, but I was desperate.  Somehow, however, I couldn't make myself pay 25 pounds for a pair of underpants.

In a bit of a distressed state--exhausted, jet lagged, unable to contact British Air not only to technical difficulties related to my loaned phone but also to the fact that no human beings seem to actually be employed by the customer service department of that airline, I went to bed, but not until after discovering that my beautiful linen, alpaca, and wool sweater in progress was stained with strange gray blotches.  I'd found earlier that some body wash had leaked in my carry-on, but the substance on my knitting didn't appear to be soap.  It was gray and sticky, and, as I learned, indelible.  In a sleepy fog, I tore out nearly four inches of my sweater, cut off the yarn, attempted to wash the yarn to reuse it, and realized the gray matter was holding on fast.

On Saturday morning, Elizabeth, aka Mrs. Thomasina Tittlemouse, a talented and gracious woman I've gotten to know through blogging, swept into my hotel like some ministering angel, bearing two blouses, a skirt, a pretty handmade kimono, and a carefully packed bottle of laundry detergent.  These offerings were balm to my wounded soul,  and a very civilized lunch with her at the National Portrait Gallery after a visit to Loop added to my healing, even if I still didn't have my suitcase. 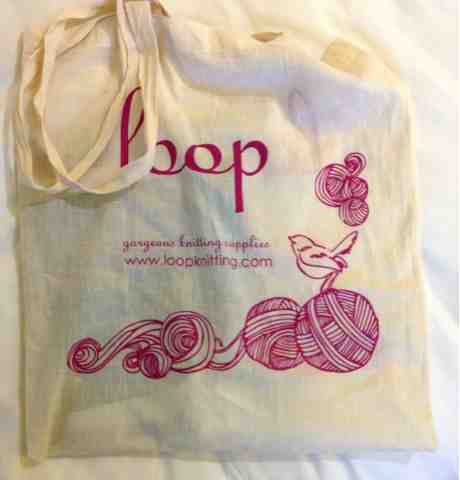 Loop is a charming shop located on a winding street bordered by quaint storefronts.  Anxious about how much money I might need to purchase clothing, I didn't engage in a major stash expanding shopping spree, but I certainly took advantage of the opportunity to absorb the colors and textures around me, forgetting my luggage woes for a while.  And I did purchase a skein of gorgeous hand dyed lace-weight yarn by Juno Fibre Arts, a British company and a book of patterns designed by the owners of Loop. 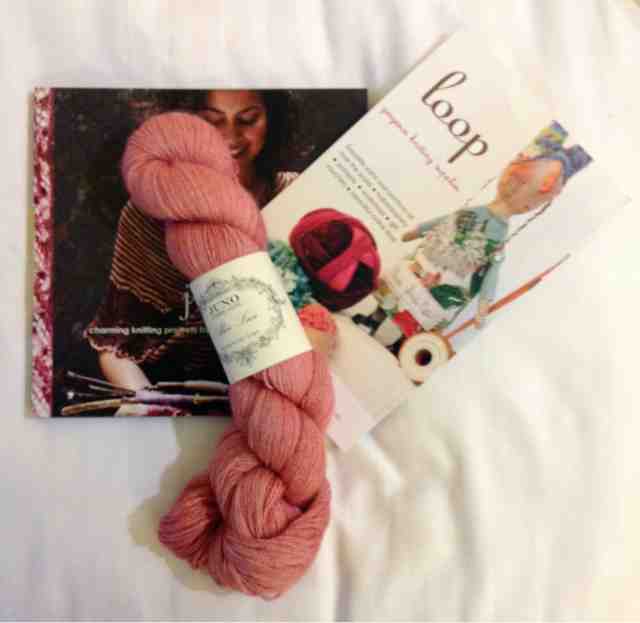 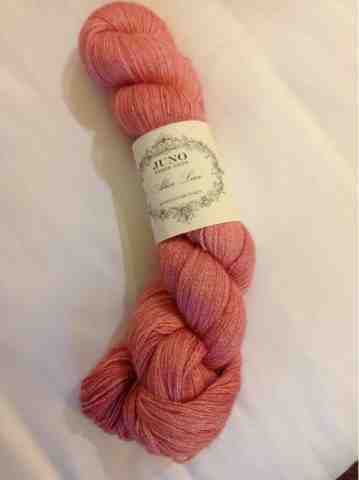 Alas, my knitting and technical issues and luggage problems continued from the Friday I arrived until I learned on Sunday (after a train ride to Oxford) that my luggage was being held at my hotel--in London.  Amazingly, though, knowing that my luggage was finally located and secured, even if it was an hour's train ride away, I calmed down a bit and was able to knit without too many hitches on Sunday night and also worked a few rows on Monday morning, while sipping coffee. And I happily plied my needles on my sweater on a round-trip train ride to retrieve my bag.  (At this point after too many frustrating attempts to count to contact British Air, I was fearful of placing my bag in their hands again.)

Here at Oxford, from where I'm writing this, my schedule is a bit packed to complete too much knitting, but what I have done has not been fraught with too many technical difficulties, perhaps reflecting my lightened state.  Despite some glitches, I'm happy I packed my eerily prescient knitting into my carry-on--if only I'd included some clothing there, too.

A final note.  Things not to say to someone whose suitcase has been missing for three days:

"I always pack a change of clothes in my carry-on."

"I never check any luggage."

"Just go out and spend.  The airlines will reimburse you."  I might believe this, if I were not suffering from computer generated voice menu overload and had proof that somewhere breathing beings handled airline business.

"I've never had any problems flying."  This line, when delivered by a wealthy, well-groomed, imposing older woman in pressed white linen jacket to a short, rumpled woman with frizzy hair (blow dryer and flat iron were in suitcase) and plastic shoes particularly hurts.  This statement is even more painful when one considers that the individual to whom it was addressed has flown four times in the past two years and in that time experienced two cancelled flights--one leading to spending over 20 hours standing in the airport spread out over two consecutive days--with a brief break for some sleep in-between--and one forcing her to madly create substitute plans while simultaneously controlling gleeful high school students (who were thrilled their teacher had to leave school unexpectedly early to catch a flight to New York from Charlotte, NC).  This new flight, replacing the cancelled (and non-stop one), also provided same teacher with an opportunity for geographical enrichment, as she was able to see Chicago en route to New York from Charlotte (efficient route??), in the snow, from the runway where she sat for some time waiting for the plane to be de-iced.