“I don't need insuring. It's like the van, I'm insured in heaven."
--Miss Shepherd

During the period from March of last year until just recently, writing was difficult for me. The ideas that flowed from my brain to my fingertips were cynical and negative, probably in response to the pervasive atmosphere of anger, fear, and outrage on social media or the nightly news. But a few months ago, I watched the film The Lady in the Van and subsequently read Bennett’s memoir on which the film is based, and I was inspired not only to write but also to create a pattern based on a whimsical hat which caught my eye in the film.

In The Lady in the Van, Alan Bennett recounts his relationship with Miss Shepherd, a cantankerous old woman who spent a large portion of her life living in parked vehicles. Fifteen of those years were passed in a van in the driveway of Bennett’s London home. In the film, Dame Maggie Smith plays Shepherd, and while it is easy to laugh at the actress’s depiction of the character’s eccentric behavior, it is also not difficult to be deeply touched, as the poignant back story of the character’s traumatic past colors Smith’s performance.

People who have dealt with individuals caught in the throes of dementia, Alzheimer’s, mental illness, or just general irascibility will find Miss Shepherd’s behavior—and Bennett’s reactions to it—hauntingly familiar. In the book, after Miss Shepherd imperiously orders Bennett to push her van for a long distance through busy London streets, she rewards him by shouting that he “had no business abandoning her” while she runs after him through the streets.  Of the incident, Bennet states, “One seldom was able to do her a good turn without some thoughts of strangulation.”

You can see Maggie Smith here wearing the inspiration for my pattern.

Bennet’s sentiments are all too similar to those I’d held after shopping trips with my late mother. After the laborious effort of extracting her from her room at her “memory-care center” (a process which included numerous trips to the bathroom on her part to reapply lipstick), and tense driving while she gave orders (such as no doors locked, so rescuers could remove us from the car, if necessary, or a ten-foot stop before a red light or stop sign, so if we were hit in the rear the car would not be pushed into traffic), I would already be more than on edge before we’d even reached our destination. Then after eons spent creeping along as my mother navigated a shopping cart down each aisle in a big-box store, I would stand at the check-out line reiterating to her that I would not be returning any of our day’s purchases. (Returning items had been a part of her daily routine when she’d lived on her own in later years before the dementia diagnosis.) Inevitably, though, a day or so after our shopping excursions, my mother would decide that most of her bounty had to go back, usually to a store 15 or 20 miles from my home. A throw blanket was “too fuzzy” or, for some mysterious reason, a jacket tried on numerous times in the store was “not right.”

While I commiserate with Bennett’s feelings of frustration, I also view Shepherd’s mental illness with compassion and empathy. She experiences a traumatic event decades earlier and has been homeless since that time. Again, her story makes me think of my own mother. She could be a maddening individual, one whose exquisite taste, artistic abilities, sense of injustice, and sensitivity made life in this world difficult for her. But she was also a woman who had been the victim of a violent attack when she was a teenager (a time when the notion of PTSD was not a part of the common consciousness), a woman who had suffered at the hands of an abusive husband, a woman who, in middle age, had lost her twenty-nine-year-old son. Miss Shepherd, particularly as she is portrayed by Maggie Smith in the film, illustrates how vulnerable we all are and how so many of us do not bounce back with aplomb (in the manner of all those Pollyannas on Facebook who revel in posting cheery memes about how the best times are yet to come).

So, in honor of Miss Shepherd, former nun, talented pianist, crusty old lady, I recreated a hat she wears in the film. She sports this accessory when she paints her van a canary yellow color.  She covers the entire vehicle . . . including most of the windows. She then affixes numerous British flags to the van, in honor of the Queen’s Jubilee. (In his book, Bennett notes that Miss Shepherd is the only person in his gentrified neighborhood to decorate for the occasion.)  She looks like a pixie in the hat (which resembles a baby’s knit bonnet) and is so joyfully engaged in her task that she appears almost carefree.  Wearing her hat, wielding her paintbrush, Shepherd is a reminder of how creative endeavor and childlike engagement can offer moments of respite from past trauma. I hope that when I don my hat this coming winter, I smile and think of Miss Shepherd and sunny yellow paint. 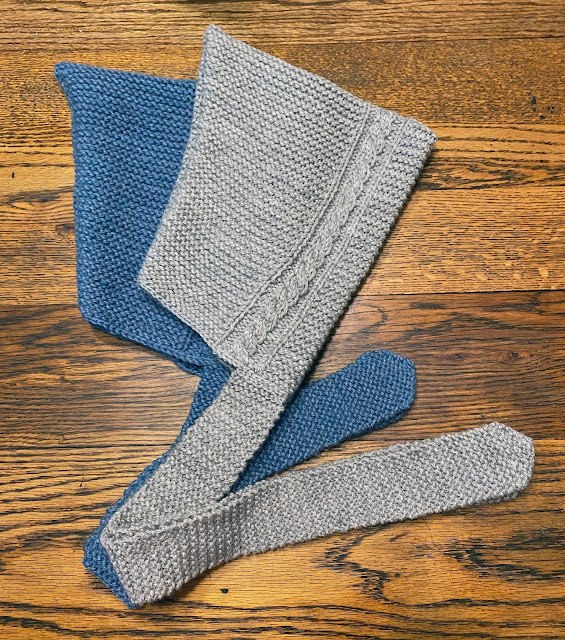 Pattern is available for free on Ravelry.