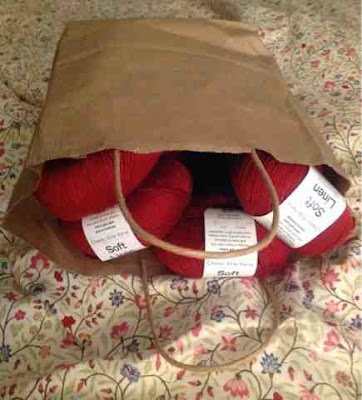 Socks seem like the perfect travel project.  So compact.  So light.  Fairly simple, save for the shaping and gusset decreases.  But after two unfortunate sock knitting travel experiences, I'm uncertain. When I flew to Italy on a school trip two years ago, I fell asleep while working on a cute pair of lace socks. Waking up somewhere over the North Sea, I discovered a sock (the first of a pair) at my feet, with the needles nowhere to be found.  I did locate the needles but found it impossible to reinsert them properly without tearing out a great deal of my work, and each time I picked up the socks to knit on my sojourn in Italy, I found that my travel fatigue led me to make lots of frustrating mistakes.  In fact, it took me nearly two years to complete this project, after packing it away so that it could lose any negative connotations in my mind.  In the end, though, I did end up with a great Christmas present for my friend, Lauren.

Last January, I brought some socks in progress with me to New York, where I attended Vogue Knitting Live.  Again, I was concerned about space and weight and thought socks would be just the thing to pack. However, somewhere on the way home--between Laguardia and Charlotte Douglass airports--my first sock in progress, along with the ball of yarn to which it was attached, disappeared.  I was knitting with some fairly inexpensive Patons from a big-box craft store, but the needles were special, tiny circulars I'd recently bought. Disheartened by my first attempt to use these new needles, I've gone back to dpns for socks for the time being and haven't searched out the Patons colorway I need to match the untouched other ball I still have in my stash.

So, rather than risk the apparent unfortunate results of socks and travel, I've started a different type of project to take with me this coming Thursday, when I fly alone to London.  Taking advantage of a sale at Cottage Yarn last week, I bought eight skeins of Soft Linen by Classic Elite Yarns.  I'd seen this yarn on the shelf for several weeks and had handled it many times, intrigued by its nubby feel and the interesting fiber content:  35% wool, 35% linen, and 30% baby alpaca.  I had a sweater pattern in mind when I shopped, Midsummer Aran by Ginevra Martin, featured in the summer 2013 issue of Interweave Knits, and this yarn seemed perfect for this garment. 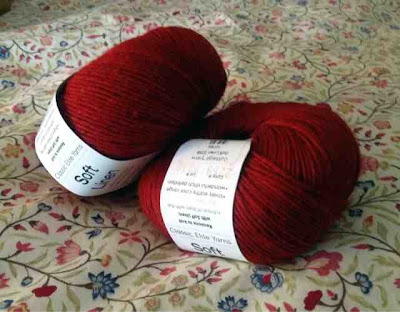 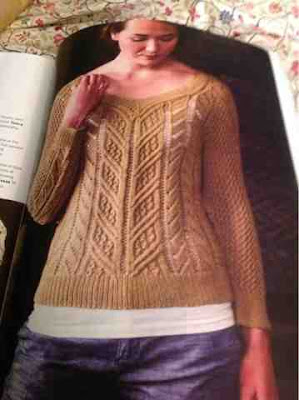 Thankfully, I decided to cast on here, at home, not on a plane where I would certainly be distracted.  After working out some initial kinks--such as trying to switch to larger needles after completing the initial two inches of ribbing while at the same time maneuvering a cable needle in and out and reading a new, rather complicated chart, along with trying to prevent stitches from slipping off (the only size three circular needle for the ribbing that I could locate in my collection is metal--and slippery), I managed to switch to more comfortable size five wooden circulars.  I thought I'd found my groove, until, after about fifteen rows were completed, I realized that something was not right. Pondering the logic (or lack thereof) in approaching the knitting chart, I checked  the Knitting for Dummies website (a great resource for folks like me), and I had my worst suspicions confirmed--when knitting in the round, a chart is read from right to left for ALL rows (with no changes as in flat knitting).

This entire process makes me lament my mathematical and spacial reasoning limitations.  I wish there were a pill I could take to supercharge the area of my brain controlling the type of intelligence that governs these abilities--but for now I guess I've have to keep including fish oil in my diet and muddling slowly along.  (I also need to revisit a circular hat chart I designed.)  I can't be too hard on myself, though, as in knitting, as in teaching high school, the first few years are riddled with mistakes that illustrate how not to do things.   For example, on my first day ever of teaching school on the first full day ever I'd lived in North Carolina (where I'd moved to from an affluent suburb in New Jersey) I insisted that two boys in my class had to follow my seating chart and blocked out the raucous insistence of the class that I shouldn't put these two near one another.  Later I learned that one boy, a blond-headed country kid, had that summer used a loaded rifle to threaten the other student (an African American) for trespassing of some sort.  (The details are fuzzy now.)  Why on earth they were scheduled for the same class I'll never know.  While no violence erupted, I did gain the knowledge to slow down and absorb a bit of the lay of the land before charging onward. Good advice for knitters and educators.

But, back to my sweater.  After realizing my error, I tore back the piece to the ribbing and began to knit again.  After nearly completing the entire chart, roughly 19 rows, I saw that I'd made a few errors on the back, which is created using a ridiculously simple chart, mostly just knit stitch.  I tore back a few rows and began to ply my needles again again, but then I realized that I still had a few errors here and there, due to not carefully paying attention to which stitches were knit two together and which were slip slip knit. I took out a yellow highlighter and carefully marked all of the knit two togethers on the chart, but didn't have the heart to completely frog the project, as I'd already done so much tearing out when trying to begin the pattern.  So I carefully examined a few of the beginning rows and did a little disheartening duplicate stitching here and there.  I felt like a fraud as I left mistakes in my knitting, but I couldn't bear to redo the entire piece and end up with rows fuzzy from reworking them so many times as well.

I just have to remember that the Knitting Police won't be coming to examine my garment and that unless I'm holding a conversations with a very keen sighted small child, no one should notice the fixed mistakes located around my waistline.  Of course, I'll know they're there, but I just need to let go--in the same manner I work to relinquish my aspirations for an aesthetically appealing, organized home space while raising two boys.

I am  now loving the pretty complexity of the cabled pattern and hope to continue to feel this way, as long as I force myself to not perseverate about my mistakes.  Other knitters who can relate to my struggles might be interested in picking up Anne Bartlett's well-written book, Knitting:  A Novel to read about an individual who struggles with perfectionism.

Despite the initial kinks, however, I think I'll be able to work on my Midsummer Aran on my trip--depending on how much the time change and resulting lack of sleep affect my energy levels.  If it proves too difficult, I'll have an excuse to buy some yarn when I get to London to do a simple garter stitch scarf.  A mindless project might be just the thing.