“Come Fairies, take me out of this dull world, for I would ride with you upon the wind and dance upon the mountains like a flame!”
--William Butler Yeats 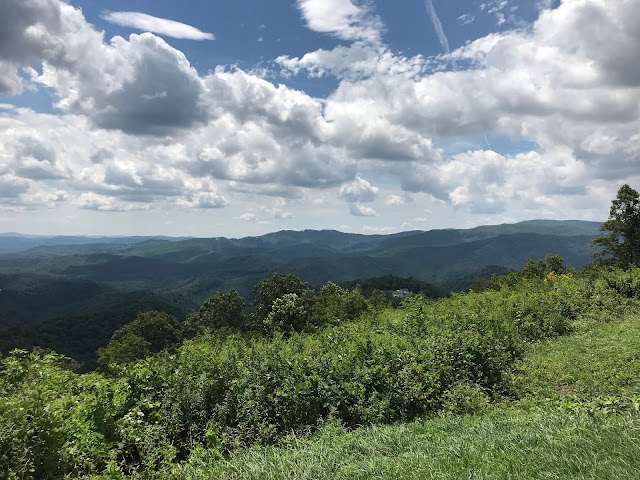 I've been out of the blogsphere since last April.  Here's why:

If someone had told me a little over a year ago that I would now be living in the mountains with two horses in my backyard, I would have been a bit incredulous.  At that time, my younger son had recently left for basic training for the Marine Corps, and my husband and I were left alone in the wake of family tragedy.  For too long, we had been accustomed to living in a state of fight or flight, not contemplating a move or even our future at all, as we dealt with one crisis or another.

In the months following this heartbreaking time, we made a couple of trips to the Blue Ridge Mountains in North Carolina, where we stayed in Banner Elk, a village nestled at the base of ski slopes.  The mountain scenery struck a chord with me and took me away, albeit briefly, from grief, shock, and confusion that were now components of my daily life.


I began to contemplate a move, but I am always inclined to want to live wherever I have passed a pleasant time—which means nearly every place I’ve every vacationed has become a candidate for a future residence.  If I'd had the resources, I'm sure my family would have moved to some charming beach town or country locale long ago.  But the logistics of this type of big change were always overwhelming, and finances and concerns about building up retirement years (as state employees) made for a life that would seemingly continue on indefinitely in a subdivision in the Charlotte suburbs.

Plus, with the rapid growth of our community and neighboring Charlotte, I enjoyed all sorts of amenities—organic juice shops, ethnic restaurants, multiplex movies, a luxury shopping mall, Whole Foods, Trader Joe’s, wine bars, craft breweries, etc.  These offerings made me take pause when pondering a move to the mountains.

Although originally a Jersey girl, I had put down roots in the Charlotte area.  I’d taught in local high schools for 24 years, raised my children there, and had numerous acquaintances and some dear friends in the area. I was in knitting groups and a local garden club.  I'd taken part in an ongoing book study  and had organized fundraising events for the Alzheimer's Association in my community.  When I'd worked full-time as a teacher (until June of 2016), I'd often lamented the lack of time for meeting with friends and getting involved in my community, and I did find that, when no longer spending my days in the classroom, it was easy to fill my time with lots of activities and companionship.

But  the reality of crippling traffic, growing numbers of impatient drivers expressing road rage, brutally hot days that seemed to go on for months, and the realization that many of my shopping trips were now virtual ones made the thought of a move easier.  But probably the most compelling reason for this change, for me, was to escape places that triggered my sadness and grief at the loss of my son, who died from an overdose in the fall of 2017.


So we made the move to West Jefferson, two-and-a-half hours away from our previous home.  With a population of roughly 1,300 people, it is a slow-moving place, but there are also numerous part-time residents adding to the population and a thriving arts community.  I've already found a knitting group and plans for a county fiber arts guild are in the works.  Quaint shops and a smattering of restaurants can be found downtown, and outdoor activities, such as kayaking on the New River or hiking, can be accomplished just outside of the city limits. It's still a bit of a drive to get to a yarn shop, but maybe that's a good thing!  I certainly have a stash of yarn up here in the mountains that should see me through the harshest winter and will probably exceed my needs for this lifetime.

The addition of two sweet Icelandic horses to our new household was not something we’d planned on, but this pair, owned by my sister-in-law and her husband, have health issues that make living in the hot climate of their previous home in eastern North Carolina detrimental to their health.  In a cooler climate, Kola (Icelandic for "coal") and Loftur (Old Norse for "air") can receive some mountain rehabilitation.  If she’s feeling well, I may just get on Kola one day and go for a ride. Loftur is 25 and has some back problems, so he will enjoy a leisurely retirement, free from too much exertion under the saddle.

Since we bought the new house at the end of this past March, I’ve had less time to work on knitwear designs, but do have a few items in the wings.  Progress has been slow, but with the winter months just around the bend, I’m hoping to hunker down inside, away from cold mountain temperatures, and get to work.