Finishing Up and Facing It 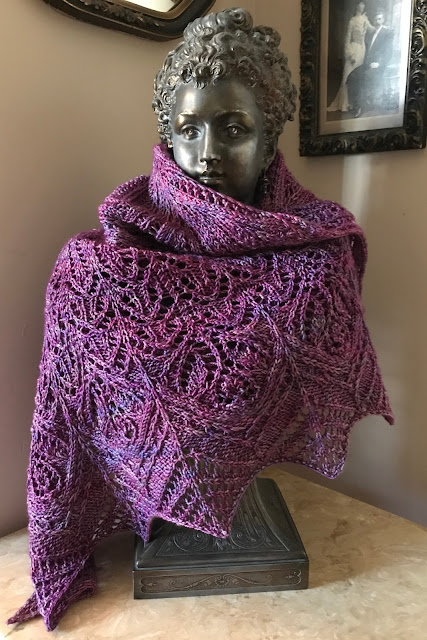 Yesterday, I cast off my Uncia shawl, a project that had been on my needles for about a year.  While it does not rank as the most challenging item I have even completed, it is probably the most tedious, as nearly every right-side row contains intricate and varied cable stitches.  Working these required innumerable trips to the abbreviation page, and, while I did eventually memorize a handful of the stitches, there were still so many new ones that cropped up, I could not commit them all to memory.  So there was much starting and stopping along the way, pauses that interfered with the smooth, rhythmic ease that I love so much about knitting.

The pattern for Uncia is found in The Book of Haps by Kate Davies, although this design was created by Lucy Hague.  Uncia  intrigued me because its lace and cable patterns were inspired by Gothic and Romanesque church architecture.  (I love old churches and castles, and I’ve already knitted a tam modeled after a stained glass window at Christ Church, Oxford and a color-work vest reminiscent of Gothic stained-glass windows.)

While much of my initial infatuation with this design had cooled a bit after reaching chart G (the final chart is H), several weeks ago I made a decision to finish it up.  I’d worked on this project off and on, often letting it rest for long periods.  It was time to move on.   While completing this shawl during the last few weeks took many hours, I was able to maintain my motivation and not succumb to the temptation to squirrel my Uncia knitting bag away—out of sight, out of mind.

In a way, the process of knitting this shawl, with its many stops and starts and tedious cables, has much in common with my life of late, so I think it is fitting that I cast off this item at a time when I have made a commitment to break with the past.  Like the irksome cables that tried my patience and interrupted my serenity, for too long I have allowed stressful situations and people to get in the way of my maintaining an even keel.

With a mother and mother-in-law with dementia, it is easy to constantly feel derailed and dismayed, especially since my husband and I are the only individuals managing their care.  With a fledgling real estate career that demands spending a great deal of money and has, of yet, yielded few returns and some great disappointments, it has been hard not to feel discouraged.  And with a twenty-year-old son who behaves badly, it is easy to feel despondent.

The phone has rung incessantly for three years.  Nurses.  Caregivers.  Doctors.  Social workers.  My mother crying and screaming at 6:15 a.m. that I must come, “Now!” as she is dying, even though she’s visited two doctors and made a trip to the emergency room the previous week.  Calls from the sheriff’s office with a subpoena for me to appear in court as a witness against the man who indecently exposed himself while I was out distributing real estate flyers.

And other stresses.  At work.  The teaching job I took in 2014 at the school of my dreams in a different school district, a place where I soon learned I would not be celebrated (as I had been in the past) for the creative critical thinking activities I devised or the passion I had for my subject.  Rigidity and minutia ruled.  The hard balance of daytime teaching with nighttime real estate classes, after I'd realized that a change was in order. At home.  My twenty-year-old’s cardiac arrest last May.  His medically induced coma.  His release from the hospital when he promptly reconnected with his wayward buddies.   A 92-year-old mother-in-law living alone in the country, one who fires nearly every caregiver and makes certain to call my husband during the few-and-far-between times I spend alone with him.  The 41 days I passed in Arizona last summer and fall, first spent dealing with a malnourished mother who refused to eat and then, on a final trip, spent packing and arranging her move to NC.  And, of course, the highway bypass being built through my mother-in-law’s front yard.  And her daughter, who used to live next-door but who moved away two years ago with her husband, taking away any back-up support for her mother’s care.

For me, navigating life these past few years in no way resembles knitting a pleasing project—it sometimes seems more like a tangled nightmare made using mohair yarn, an illegible chart, and size 0 double-pointed needles. And, as with sticky mohair, there is no easy path to frogging back to happier times.

But, like the housewife, Evelyn Couch, in Fried Green Tomatoes, I’ve had a cathartic moment.  In front of a supermarket, passive and unassuming Evelyn, played by Kathy Bates, has her parking space rudely stolen by two young women, one of whom yells, “Face it, lady. We’re younger and faster.” Evelyn then repeatedly slams her car into the young women’s vehicle and addresses them, by stating,  “Face it, girls. I’m older and I have more insurance!” Like Evelyn, recently I was propelled to action and ordered my twenty-year-old son out of my home, as I had done many times before.  But in this instance, I meant business. And, after a three-day standoff that included changing the locks, he no longer lives with us.  His room now houses a different type of stash (yarn, of course). His eviction sapped my strength, so afterward I hired a friend to tend to my mother for a couple of days while I decompressed.

The current swirl of responsibilities and challenges to stay strong may not abate for years.  My son calls frequently, blaming, begging, and bewailing the hardships of his new existence with particular emphasis on the fact that he has no wifi where he is staying.  But, rather than take the bait as I had done for so long, I have disengaged.  Maybe there will be a time when this long season will be a thing of the past, but until it does, I must move forward and view the phone calls and other challenges as troublesome, like the cable stitches of my shawl, but not worthy of derailing my life, career, and the harmony of my home as I had let them do for so long.  While the Uncia shawl took over a year to complete, I have been struggling for three years to reach this point.  Why did it take me so long?