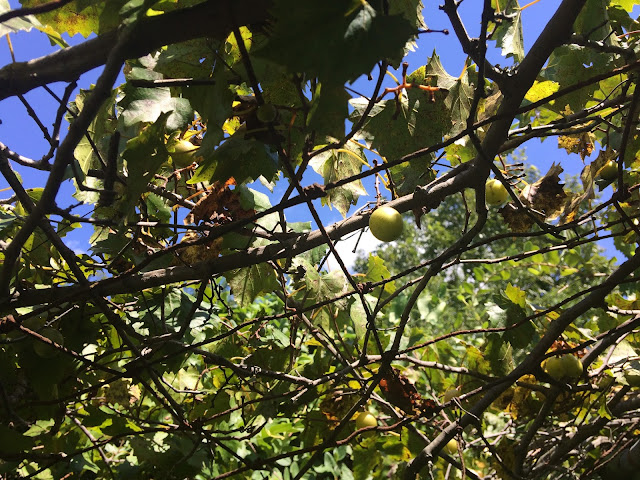 A news anchor announced this morning that this summer the Charlotte area has seen 71 days with temperatures in excess of 90 degrees.  A steamy, muggy span with afternoons when thunderstorms erupted, making a trip to my backyard after such a downpour feel like a visit to an Indian sweat lodge for a steam bath, minus any residual health benefits.  While I’d been aware of the heat, I was shocked to hear that the blistering days had lasted for such a long period.  Time has alluded me recently, perhaps because I spent so much of it indoors, taking real estate post-licensing courses, visiting with my mother in her home in Arizona, and engaging in home-repair projects that had been ignored during the last couple of years, when my family faced some challenges that derailed us a bit.  Of course, during these dog days, I also spent some significant indoor time knitting.

As I surveyed several recently finished objects, I noticed that these items had something in common—their green color.  I wonder if on some subconscious level I hadn’t chosen to work in this verdant hue because it is is such a cool, organic color, one which is easy on the eyes and which transmits a sense of much-needed peace and tranquility.   Or maybe I chose green because it represents renewal and change, appropriate at a time when I have transitioned to a new career and there have been alterations in my family’s living situation, as my nineteen-year-old son recently moved out to his own apartment.

As I examined my green projects and mused about color symbolism, the poem Sir Gawain and the Green Knight came to mind.  It is a work which I typically taught toward the beginning of the semester, after starting off with Beowulf.  This medieval romance allowed me to escape the cinder block confines of my classroom to sojourn, along with a scant number of equally romantic students, to the age of chivalry with its heroes and high ideals. The story also provides opportunities for explaining allusions and symbolism.  The Green Knight himself is reminiscent of the Green Man, an ancient fertility symbol, and the holly bob the knight carries into the hall of Camelot on Christmas Eve is an evergreen, symbolic of life to come after the darkness of winter.  Even the Green Knight himself represents rebirth, as he virtually comes back to life as Gawain chops the behemoth’s head off with the knight’s giant green axe:

On strong legs and roughly reached through thrashing
Feet, [Gawain] claimed his lovely head,
And carrying it to his horse caught the bridle,
Stepped in the stirrups and mounted, holding
His head by its long green hair,  Sitting
High and steady in the saddle, as though
Nothing had happened.
(Burton Raffel translation) 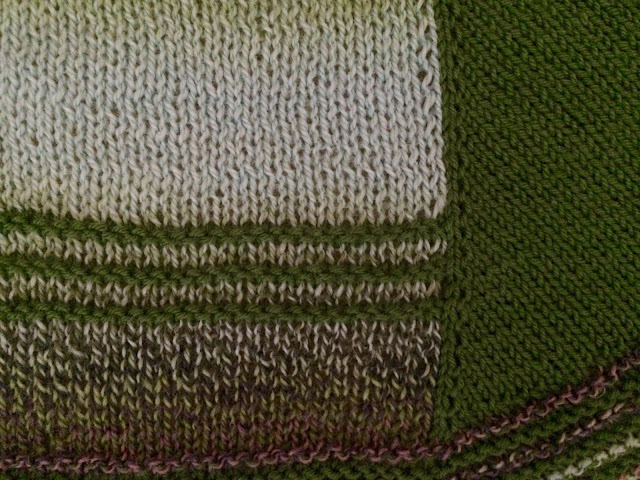 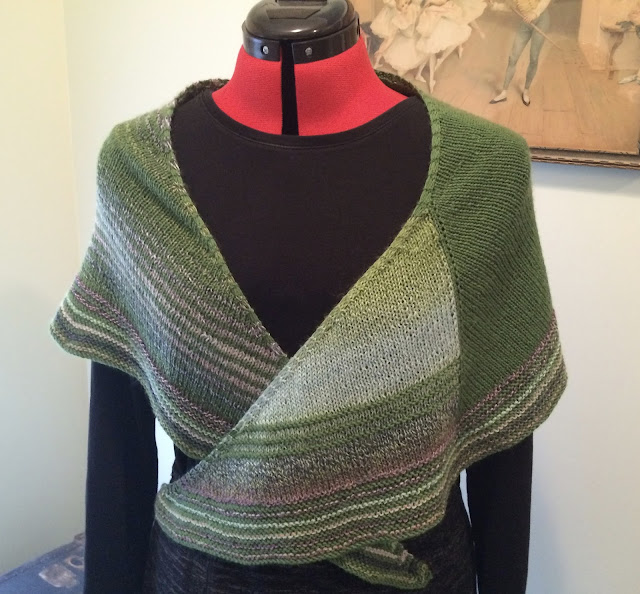 As I try to shed off my teacher skin, I cannot approach the fall without thinking of Gawain, Beowulf, the Wife of Bath, and a host of other literary characters, along with some equally idiosyncratic and larger-than-life teenagers, who frequented my universe for the past 24 years.   I also can’t help but look back at how a series of sometimes traumatic events surrounded my life change.   However, I recently began reading a book, which offered some reassuring insight about the chaotic nature of change.  I am not normally a person who reads self-help books, but a woman in one of my real-estate post-licensing classes told me that at one time she had regretfully left a new career in real estate to return to the retail industry because of the frightening nature of real-estate sales, with its commission-based earnings.  We talked for a few minutes about fear, and then she pulled a book with a bright yellow cover out of her tote bag, a volume entitled, You Are a Badass.  She said, “You need this book.”

Even though I typically avoid self-help literature, I placed an order on Amazon and have read several chapters so far.  The author, Jen Sincero, states that when a person makes a radical change, he or she is “virtually murdering The Big Snooze.  And she is going to come at you, rolling pin raised over her head, to beat you back into your old life.”  In other words, everything around us might fall apart for a while.  We get hit by a bus or the new business we opened burns to the ground.  Limiting false beliefs and fears basically constitute “The Big Snooze,” and getting rid of these things isn’t easy.  So this reinvention thing might be a slow and sometimes painful process. A believer in a higher power, Sincero also emphasizes that the whole journey is much easier with “faith being greater than your fear.” 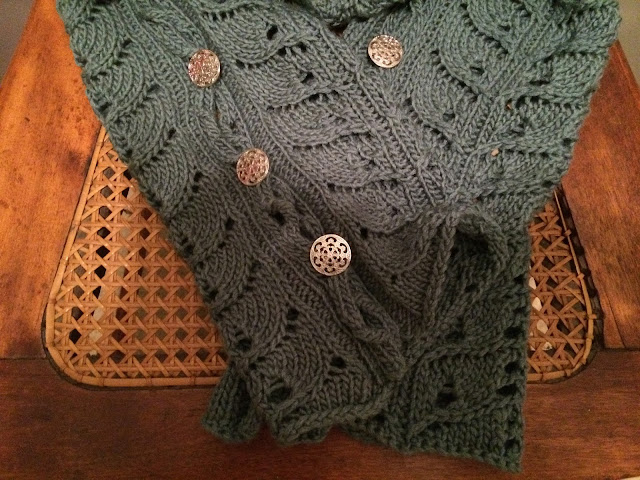 Funny, though, a week or so ago, I cast on a sweater using Malabrigo Rios, a garment with a yoke striped with vibrant Ravelry Red.  And another project I have on the needles, the Uncia hap, uses Fiberspates Vivacious yarns in the Crocus colorway.  I’m seeing a trend here, as I have a bag full of bright red worsted in a silk-merino blend that I plan to cast on next, to make a sweater for a Christmas gift.  As we head into fall, perhaps the time for my seeking the cool comfort and escape of green is over, and with cooler temperatures not far away, my knitting in scarlet and purple tones will reflect an energetic and passionate moving forward, armed with faith, leaving fear behind. 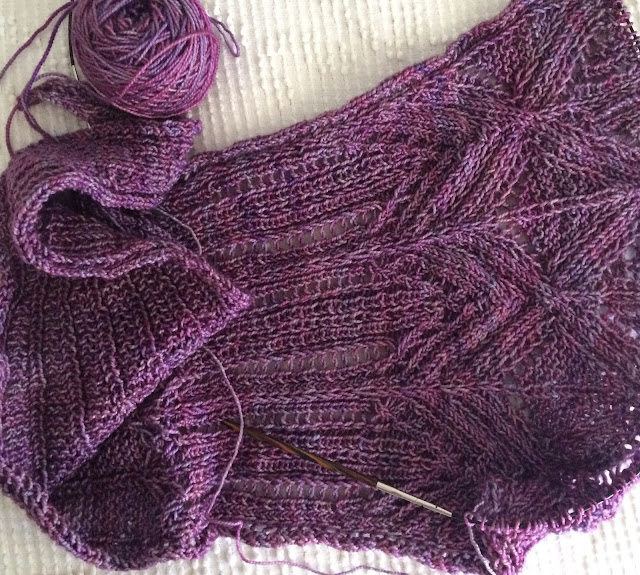 Here are some photos from a trip last weekend to the Charlotte Regional Farmer's Market, where brightly colored vegetables announced that fall is just around the corner. 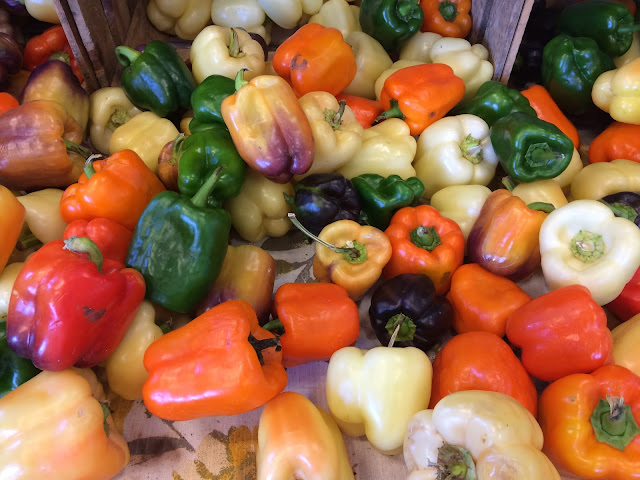 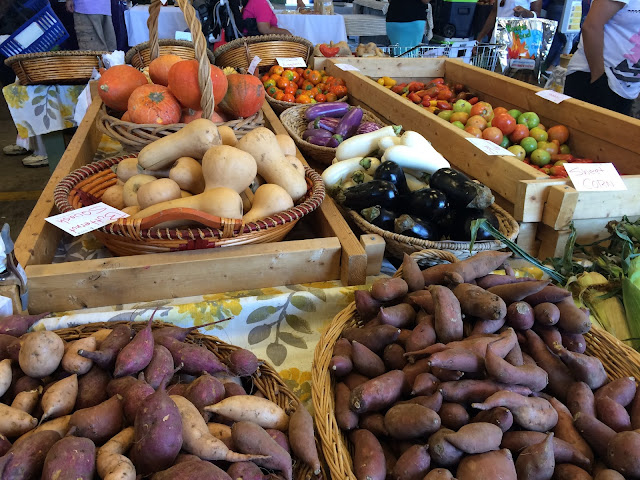 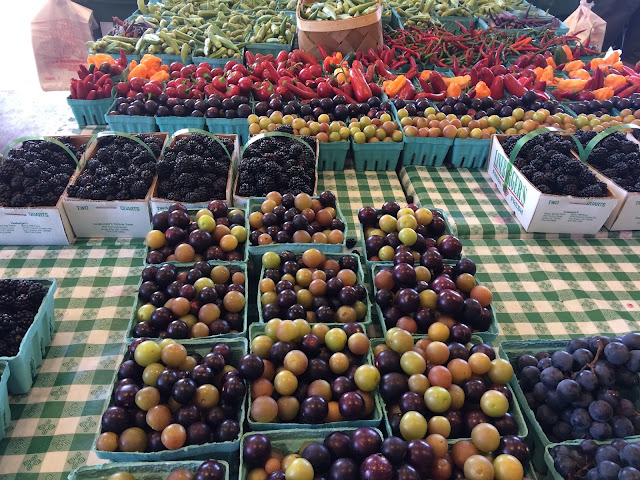 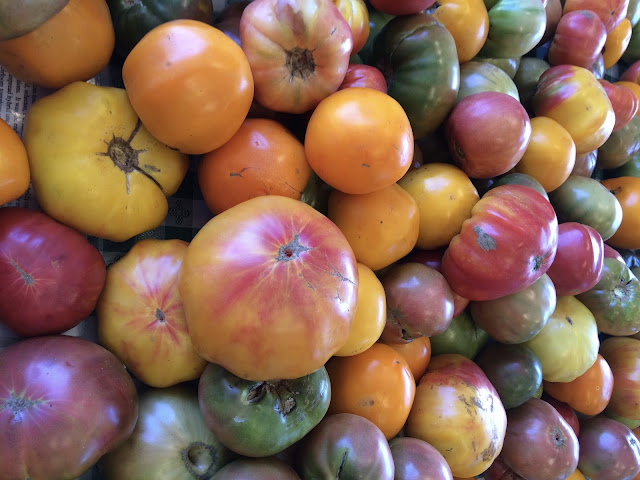 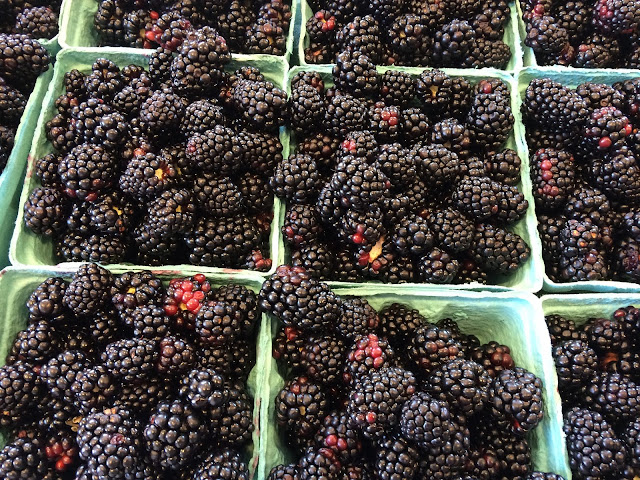 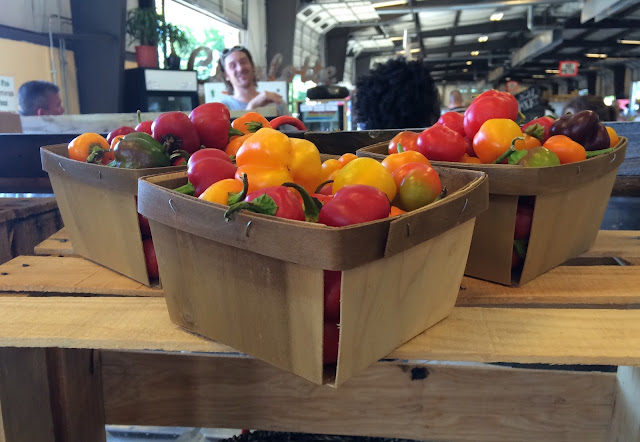 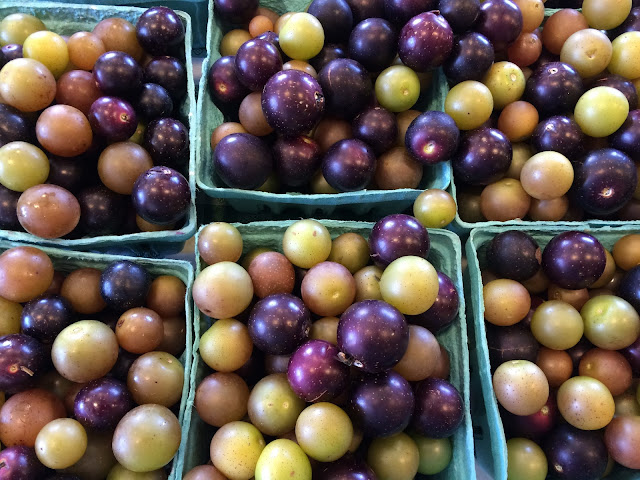