A host of articles has appeared in recent years touting how knitting ameliorates a plethora of physical and psychological woes, including Parkinson’s disease and depression (see links at bottom of this page).  The pattern repeats and counting of stitches so intrinsic to the craft are also purported to help obsessive compulsive types channel their disorder.   When I recently read the latter assertion, it gave me pause, as I have to say that the tidy repetitive nature of knitting—especially prevalent in working Fair Isle and lace—speaks to some deep layer of my nature.

I have to confess that I am a bit fanatical about performing certain domestic procedures—such as actually re-affixing the lids to peanut butter, jelly, and mayonnaise jars and, subsequently, putting these foodstuffs away.  This preoccupation has somehow not been passed on to my teen-aged sons, whose adolescent brains must view this concern as quite neurotic.  Yet I still believe that a love of neat repetitive patterns must have a genetic component, or else why would all English teachers, regardless of their educational backgrounds, seem to have mysteriously inherited certain compulsive fixations, especially those related to the proper use of apostrophes and to the need to capitalize the letter “i” when referring to one’s self in an essay?  (Blame text messaging and its auto-correct feature for the "i" problem.)

Whether manifesting a psychological disorder or merely finding its geometric design intriguing, I had to cast on the Orkney Fair Isle Tam featured in the fall 2015 edition of Knitting Traditions.  Designer Elizabeth Lovick’s re-creation of an item in a photo from the Orkney island of Papa Westray features a pleasing circular construction that’s makes for a quick knit, so this project provides instant gratification.  Needing just such a fix, I interrupted my progress on Kate Davies’ Foxglove Sweater to begin work on the Orkney.  Using size one needles to knit the ribbing on the wrist of sleeve number two was a bit uninspiring, as the eagerly anticipated process of knitting the colorful yoke seemed so far off in the future. 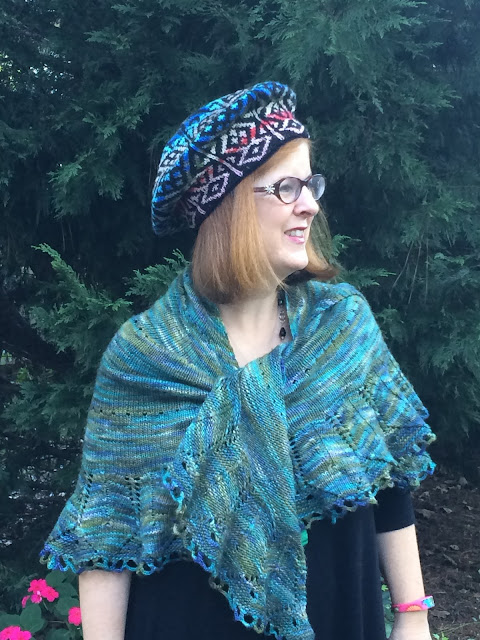 Casting on the Orkney was also the result of being inspired by my local shop owner, Lyn Millward (of Cottage Yarn), who is now in the process of making her third Orkney tam.  Lyn came up with the clever idea of using a variegated yarn in lieu of the various contrast colors called for in the pattern.  Using this type of yarn makes for quick knitting and visually engaging results.  It’s also quite fun to anticipate the color changes and to guestimate which color will round up the closure at the hat’s top.  Liberty Wool Light works great for this project. 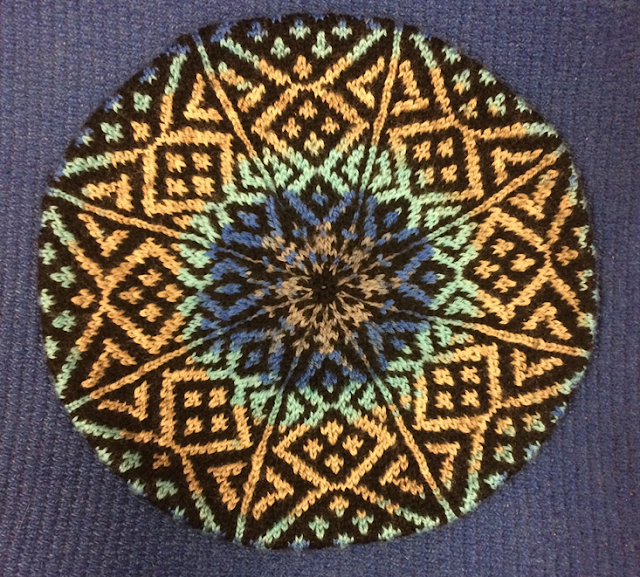 Of course, I’d also like to make another tam and stick to the traditional colors Lovick includes in her design.  I know that if I am brave enough to burrow under the pants hanging in my closet (garments with sizes that run the gamut--from 4 to 12) and dig behind a pile of shoes in my closet, I will probably be able to find enough fingering-weight yarn to make several tams—actually probably enough to use to warm the heads of an entire girls’ basketball team.

As my students prepare to turn in research paper and to take mid-term exams, maybe it’s a good thing that I have the Fair-Isle avenue to channel my obsessive tendencies.  Maybe the little “i’s” sprinkled throughout their papers will seem festive, like confetti—or holiday snow—and the use of “the soldier’s traveling on Beowulfs ship” will make me smile, as I anticipate going home in the evening to a warm fire and to the unfolding combinations of colors and patterns in my knitting.