As I discussed in my last post, as a teacher, throughout the school year, I anticipate the joys of summer.  I envision savoring hours and hours of delicious time alone to pursue my knitting, to work in the garden, to cook wonderful homemade meals with fresh produce, to travel, and to go out at night.
Take Sunday evening, for instance.  For years and years, my husband and I have discussed going to Ri Ra, a bar and restaurant located in uptown Charlotte that hosts a live Irish band on Sunday nights. In typical weary fashion, however, as we discussed the possibility of going, Dennis and I ultimately shied away from the prospect--not discouraged so much by the minor challenge of driving to the city, but of having to face returning home later. So, I cooked some hamburgers and we settled in to watch some episodes of the BBC mystery series Rosemary and Thyme that I’d picked up at the library.  While I watched the program, I knit a miniature mouse--the May Queen pattern from a bonus booklet that came shrink wrapped with a British knitting magazine I’d purchased months ago.


Somehow, as a young woman, I’d never imagined myself home on the weekend, sporting pajamas in fabric printed with winsome cats.  I'd never anticipated that I'd ever watch British mysteries while busily knitting away before retiring to bed prior to 9:00 p.m.  (I guess it isn't surprising that my children equate  their parents' very existences with boredom and view us with horror as some kind of pitiful anachronisms in the modern world.)


Alas, much as I grossly overestimated my time and energy for creative output and visits to night spots this summer break,  I was able to achieve a minor accomplishment.  I created a pattern and actually completed knitting it. While some might find this achievement minor, for me (still a somewhat novice knitter), this task was a formidable one that entailed swatching, charting, and hours and hours of frogging. (I’m only 5’ 3” tall and what was initially to be my final product would have looked fabulous on an Amazon.) 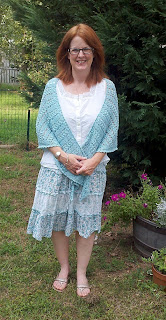 Whatever pitfalls I encountered, I did complete a pretty garment and I learned how to make a knitting chart along the way. I also garnered some other lessons, from which other knitters could benefit:


Like your favorite jeans that fit snugly when taken out of the dryer and sag sag loosely in the afternoon, cotton expands. A neat and tidy 4 x 4 swatch has a gauge that a designer can use to plan a pattern, but that same yarn, stitch, and needle size will have an entirely different gauge when knit up into a large project, as cotton, or cotton-blend yarn, will expand and drape, seemingly endlessly growing like some mutant aberration.


Beaded yarns are expensive for a reason. After four or five trips to the craft store to purchase packs of beads and hours spent stringing said beads at home, at a friend’s house, on the beach in South Carolina, on a lake in New York state, in a coffee shop, I realized that I could have bought the beaded yarn and probably had enough time to knit several shawls, along with a sweater or two and saved money, too (those packs of beads might only cost $2.99 each at Michael’s craft store, but the cost of gas used to take me to and from the store probably could pay for a nice meal at an elegant restaurant or a skein or two of beaded art yarn).  Conversely, the very mindless nature of stringing beads is a wonderfully soothing occupation. 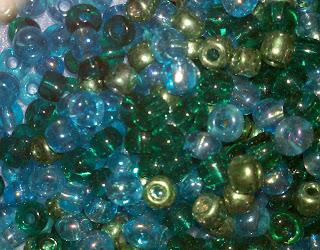 Finally, while executing the design and producing it was engaging and interesting, doing so was a job and trying to focus and work at home is not easy.  With two sons who eat an amount of food equal to their respective body weights each day, I found that constant cooking and shopping filled many hours, not to mention the mountains of sweat-soaked laundry (football practice went on all summer) that needed to be attacked.  So this summer, once again, I found that I didn’t have the endless hours I’d projected to sit in the garden, sip iced tea, and lazily knit project after project. I did, however, complete one design and project. The pattern in provided here in PDF form.