Cleaning Up and Casting Off

A couple of years ago, I received a message from a stranger on Ravelry, a woman who informed me that she would be happy to send my high school Fiber Arts Club some knitting needles she no longer used.  I was moved by this woman’s generosity—even more so when I received a box filled with more than 20 pairs of quality stainless steel circular needles.   The fact that someone could part with such treasures awed me as, at that time, I viewed my personal knitting supplies and library as sacred items I would hold onto for a lifetime.  A few months ago, though, with the help of a friend and the advice from a handy little book by cleaning consultant Marie Kondo entitled The Life-Changing Magic of Tidying Up:  The Japanese Art of Decluttering and Organizing, I have altered this attitude, not only towards my knitting supplies, but also towards other personal possessions.  I also experienced an epiphany which has, as the title of the book asserts, been life-altering.

It all started before Christmas, at the beginning of my two-week break from school, when I met two friends and former co-workers for lunch.  I approached this get-together with a bit of a heavy heart.  Like most people employed in education, at the end of the semester, I was exhausted.  I had gained roughly 20-25 pounds during the previous year-and-a-half I'd been working at my new job, due to stress eating.  Every week for months, I’d made a resolution to eat better, but each evening would return home from work and binge on carbohydrates.  All-in-all, on top of two months of nearly constant rainfall, that day I was in pretty grim holiday spirits.

After complaining and catching up, I asked one of my friends (and knitting buddy), Tonya, however, if her teenaged son, who owns a pickup truck, would be interested in helping me clean out my garage during my time off from school.  She contacted him and we made a plan for the Monday morning following Christmas.  Tonya, who is an energetic chemistry teacher with a flair for home décor and craft projects, showed up on that misty dark day, too.  Revealing my horrendous garage to this individual—one whose inviting home epitomizes order—was an experience akin to divulging a shameful and freakish habit on the TV show My Strange Addiction (although I suppose having a hoarder’s garage isn’t quite as unsavory as enjoying drinking human blood or eating cat hair).  Of course, my visitors were probably uncomfortable, too—in the manner of Pip in Great Expectations when he first lays eyes on Mrs. Haversham’s wedding feast.

With my prompting, my fifteen-year-old son joined our garage group.  Over four hours later—after much laughter and gracious cajoling from my friend in the form of “Are you going to use this?” (as she held up items such as a hand-me-down Tupperware pitcher from the 1960s) or “What is this?” (as she raised up a cast-iron 19th century shoe last), lines delivered in her charming southern accent, with inflections and drawn-out vowels that seemed to add to the humorous irony of these inquiries.   Seeing my treasures through her eyes convinced me that I needed to make a change, so after four truckloads of detritus (including an inflatable boat, an old car stereo, and attachments for a prehistoric two-ton carpet shampooer) were deposited at The Salvation Army and after we’d created a mountain of trash in the yard—miracle of miracles, I was able to drive my car into the garage!  I felt light, as if the proverbial albatross  had been removed from my neck, and this sense of liberation translated itself into days of revived energy, which manifested itself in my tackling the inside the house to purge it of a great deal of clutter. 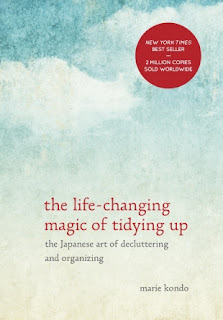 Taking a break from many trips to The Salvation Army, a few days later, I headed to Barnes and Noble, where my eyes lighted on Kondo’s book.  I am not one for self-help books and am typically a bit embarrassed to stand in the book store perusing them, but, Kondo’s work is more of an instruction manual and, after reading a few pages, I was intrigued.  I’d heard that organizing one’s home can reverberate and impact other areas of one’s life, and Kondo’s anecdotal evidence supported this notion.

My experience supports her assertion, too.  I now have a kitchen where I can actually see the food in my pantry and am not bombarded with an avalanche of foodstuffs and housewares when I try to extract a sleeve of crackers from a container or remove a box of pasta from a shelf.  Inspired, I also revamped my eating habits and replaced holiday snacking sessions (including three days spent single-handedly devouring an entire enormous dulche de leche cake from Costco) with eating sensible meals and snacks of fruit or nuts.

When it comes to clearing clutter, Kondo’s mantra to discard objects that do not “spark joy” prompts the most acquisitive and retentive hoarder to let go.  And her organizing tips are so practical but simple, I feel a bit foolish for not thinking of them myself.  After wrestling with crammed and messy sock draws for over four decades, I now have a drawer where every sock is tidy, visible, not uncomfortably stretched (Kondo attributes human emotions to objects) with room to spare for new acquisitions.

Kondo also notes that often when people make radical changes in purging their home environments, other changes in their lives follow.  My recent experiences seem to confirm her assertions.  I have lost weight and can fit back into skirts I bought last year to wear to my new job.  I have also submitted retirement papers to my place of employment, signed up to take a real estate pre-licensing class, and am prepared to move forward.  I am also eager keep clearing my house and purging my yarn stash.  Kondo doesn’t have any specific tips for organizing yarn per say, but she has motivated me hold each skein in my hand and weigh its capacity to elicit joy.  I want to let go of guilt about not using certain skeins and to surround myself with pleasurable textures and colors that beckon me to use them.


In the coming months, as I transition to a much less structured life, one lived outside the bounds of bell schedules and semesters, I hope to continue to work to let go of negative behaviors and material objects I’ve held onto for far too long.  A few days ago, I purchased Kondo’s second book, Spark Joy:  The Illustrated Guide to The Life-Changing Magic of Tidying Up.  If the results of reading Kondo’s first book are any indication, reading this little volume with its illustrated instructions on specific tidying tasks, (such as how to fold underwear) will be sure to prompt more life-changing experiences, maybe even some of those involving knitting and yarn! 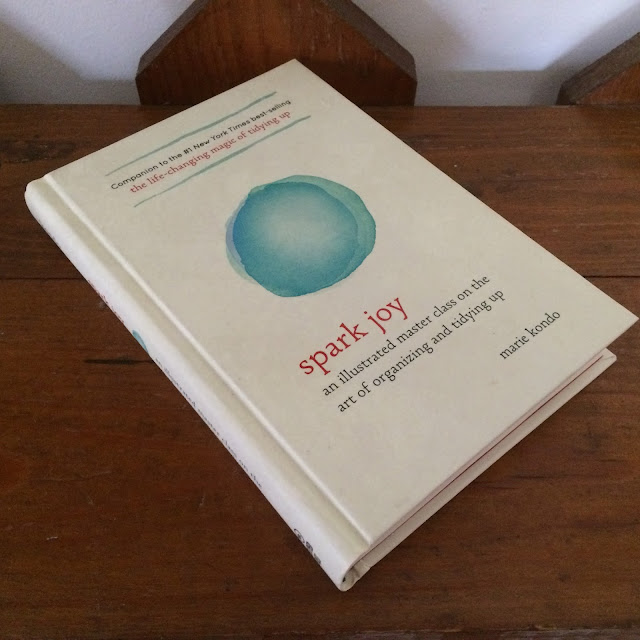 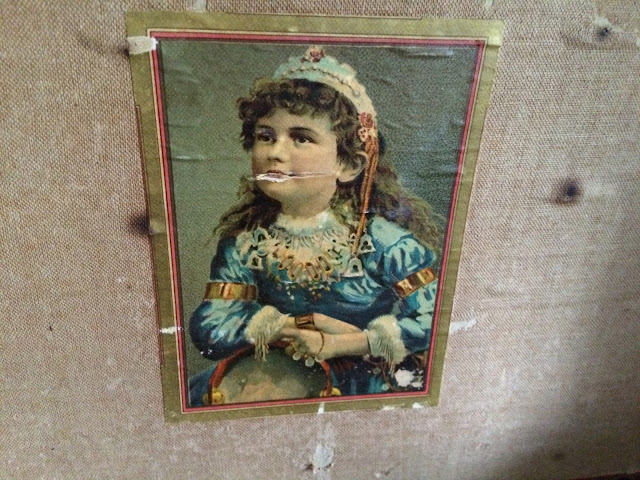