Knitting Strands . . . and the Big Picture

In the Company of Others is one volume in the At Home in Mitford series by author Jan Karon.  This particular work recounts the trials and joys of an Episcopal priest employed in a mountain town in North Carolina (a locale which is loosely based on picturesque Blowing Rock).  Years ago, I read most of this series and found the books to be both inspiring and moving, while not as overblown and sentimental as other inspirational fiction. 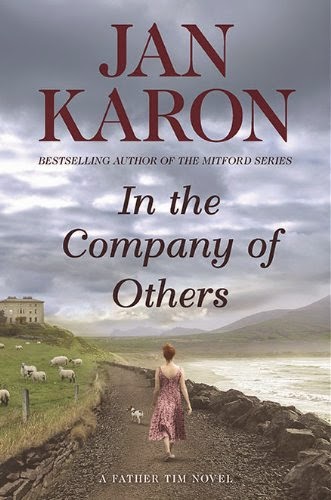 Unearthed at Goodwill, this novel is proving to be bit of a serendipity, as it deals with topics that hit close to home, such as a dysfunctional family—the one in the story is replete with an angry teen, an equally irate alcoholic mother-in-law, and disturbing secrets that keep rearing their ugly heads.  Father Tim and his wife Cynthia, find themselves in the bosom of this family at a guest house on an Irish vacation gone awry.  In the Company of Others manages to take the characters’ dark moments, unfortunate mishaps, and painful memories and use them to show the reader how unrelenting love and a little less focus on personal desires can carry us through the most trying of times.  In essence, the tale focuses on not forgetting the big picture.

I need this inspiration at this time. A close friend and I both took new teaching jobs this year.  We are both the same age (fiftyish) and both, as self-proclaimed overachievers and perfectionists, have what I like to call a "heightened sensibility" to criticism.  Our quest for affirmation can be maddening, especially when, as newcomers to highly bureaucratic school systems, we are under close scrutiny and are subject to numerous evaluation sessions.  Unfortunately, the extensive public teacher assessment system in my state doesn’t seem to look at the overall picture throughout the year, just at isolated snapshots.  The entire process is akin to having a stranger drop into your living room while you are knitting a sweater.  The person scrutinizing you might see you finally cast off the most gorgeous lace creation or he or she might observe, instead, you, head down, mouth pursed, eyes glazed, in the process of tearing our six inches where you bungled the pattern.

When you go in to hear a detailed and lengthy exposition of the observer’s reflections, you are informed of everything you already knew:  your head was down, your expression was unpleasant and not engaging, you were oblivious to the fact that your cat was clawing the armchair cushion, and, finally, your lace pattern was misaligned by three stitches over the course of five rows.

Years ago, before the new teacher evaluation system and the current mania for accountability, the experience would not have been the same.  It would have been less demoralizing and would not have contributed to sleepless nights where the observee envisions a future eating cat food or to his or her burgeoning phobia of squawking walkie-talkies (items typically carried by school administrators when they darken classroom doors).

My first year teaching was spent in a high school in a small southern town with a large population of low income residents.  One afternoon, right after lunch, I was told that I had to immediately move everything from my classroom to another room across the hall.  For some reason, an anticipated renovation process was suddenly given the go-ahead—or maybe the construction workers, a motley crew who proved themselves to possess less-than-stellar work ethics, had finally deigned to show up at the job site.  I had my rather rowdy third-period class (one which included five pregnant girls who were all due roughly around the same time) pick up and move furniture, filing cabinets, desks, books, boxes of papers, etc.  (Computers weren’t a part of education at that time.)  As I stood in the hallway between the two rooms supervising, a smiling, suit-clad female administrator from the downtown office informed me that she was there to observe my class.  I told her we were in the throes of moving, but she said that was fine.  She could wait.

Since there were many hands, the moving process only took a few minutes.  I plugged in the overhead projector and got back to work.  I don’t remember the lesson content—maybe something to do with The Canterbury Tales—but as I stood in the front of the classroom the energy was palpable.  The move had hyped up the students, and I knew it would be no easy task to settle them.  As I presented the day’s activity, I noticed that one resourceful individual had found the arm (just the arm) from a ragdoll in the detritus from the move.  (I think this item was a leftover from some student's creative project.)  I also observed that the students were tossing it to one another when they thought I wasn’t looking.   Somewhere in the midst of this melee a projection screen, improperly affixed to hooks on the wall during the move, become unattached on one end and glanced off my head.  Inwardly I groaned, but I went on with things, making unpleasant faces (when I thought the observer wasn’t looking)  at whatever student was currently in possession of the doll arm.  I finally snatched up the offensive item and tossed it in the trash while the observer was bent over, scribbling on her yellow legal pad.
As an administrator doing a formal review, my observer was obliged to keep a running script of everything that was said in class and was also to record the action around her, so I was prepared for the worst.  Ultimately, though, during our post-conference she focused on the important and positive things, on the overall picture—and didn’t even mention the doll or the projection screen.  The previous review system she had employed focused on practical things.  Were the students working? Was the teacher teaching?  Were things generally organized?  The new system is much more esoteric and political, asking other questions.  Are the activities global in nature?  Is the teacher respecting diversity?    Does the teacher “collect and analyze student performance data?”  After a recent review (of a lesson that took place on a day when I was suffering from the flu and unable to correctly process one thought, let alone engage students with thought-provoking questions) where I was excoriated for the sin of presenting mere facts about the history of the English language, I spent an evening raging and generally beating myself up.  But later, I sat down to read some of Karon’s book and felt my spirits settle.  While Father Tim and Cynthia’s trip plans are thrown off by an injury to his wife’s ankle, a theft in the guesthouse, and a cast of innkeepers with personal woes, they manage to find solace and peace.  Father Tim hears confessions and attempts to guide lost souls.  He also befriends the guesthouse dog and explores the countryside, while his wife, laid up with her injury, paints and enjoys the pleasures of afternoon tea in bed.  Both enjoy local culinary delights.

Inspired by these characters, yesterday, the day after my disturbing “post-observation conference,"  I woke up and knit for a while, while drinking coffee in bed, and next decided to spend the day enjoying simple pleasures.  I drove to a café for a solitary lunch and then went to Barnes and Noble, for coffee and a long period spent perusing knitting magazines.  I even splurged and bought Never Let Me Go, a new paperback novel by author of Remains of the Day, Kazuo Ishuguro.  I’m considering suggesting his new work for student summer reading, if it proves to be suitable.  I then went to Cottage Yarn for a little knit therapy.  Words of comfort from a retired teacher who frequents the shop and the infectious enthusiasm of Charo, another regular customer, with a self-diagnosed knitting addiction like my own, were just the medicine I needed.  It was a bright, unseasonably warm day, so I opened the sun roof on my way home and decided that I needed to lose myself in that moment.  During the course of the day, I also talked several times on the phone with my teacher friend in similar circumstances, who—despite the fact that she is highly accomplished and has taught successfully at the university level—had spent part of her weekend crying due to similar job woes.  We encouraged one another to pay less attention to scrutiny and to have faith (despite any feedback to the contrary) in the fact that we are working very hard and are challenging our students to grow.

We also need to stop comparing ourselves to the super teachers who spend sixty-plus hours a week at school and then spend their weekends at twelve-hour debate championships or engaged in marathon grading sessions.  Deciding to take my own advice, I have unearthed my sewing machine, an item which was put away at the start of this hectic school year, and am determined to finish some projects over the coming weeks.  I also plan to be a better correspondent to long-neglected pen pals, and I even made a pot of comforting homemade soup.  Maybe someday soon, I can also attempt to create an original knitting design.  (Efforts such as this were abandoned when I embarked on my new employment.)

I also have to finish the Tracery Vest, which will probably never fit me, as, preoccupied and stressed, I inadvertently cast on and worked the wrong-sized garment.  (I haven’t had a thirty-two-inch bust since the fifth grade!)  I won’t be discouraged, however, as I will have faith that this garment will expand during the blocking process.  If that fails, I will just have to keep my eyes and ears open for the perfect diminutive person to be the recipient of this item. This project has afforded me hours of knitting pleasure—as well as some expanses of exasperation—but, in the big picture, the finished garment might just turn out okay.  I hope I can say the same for the results of this wearisome school year. 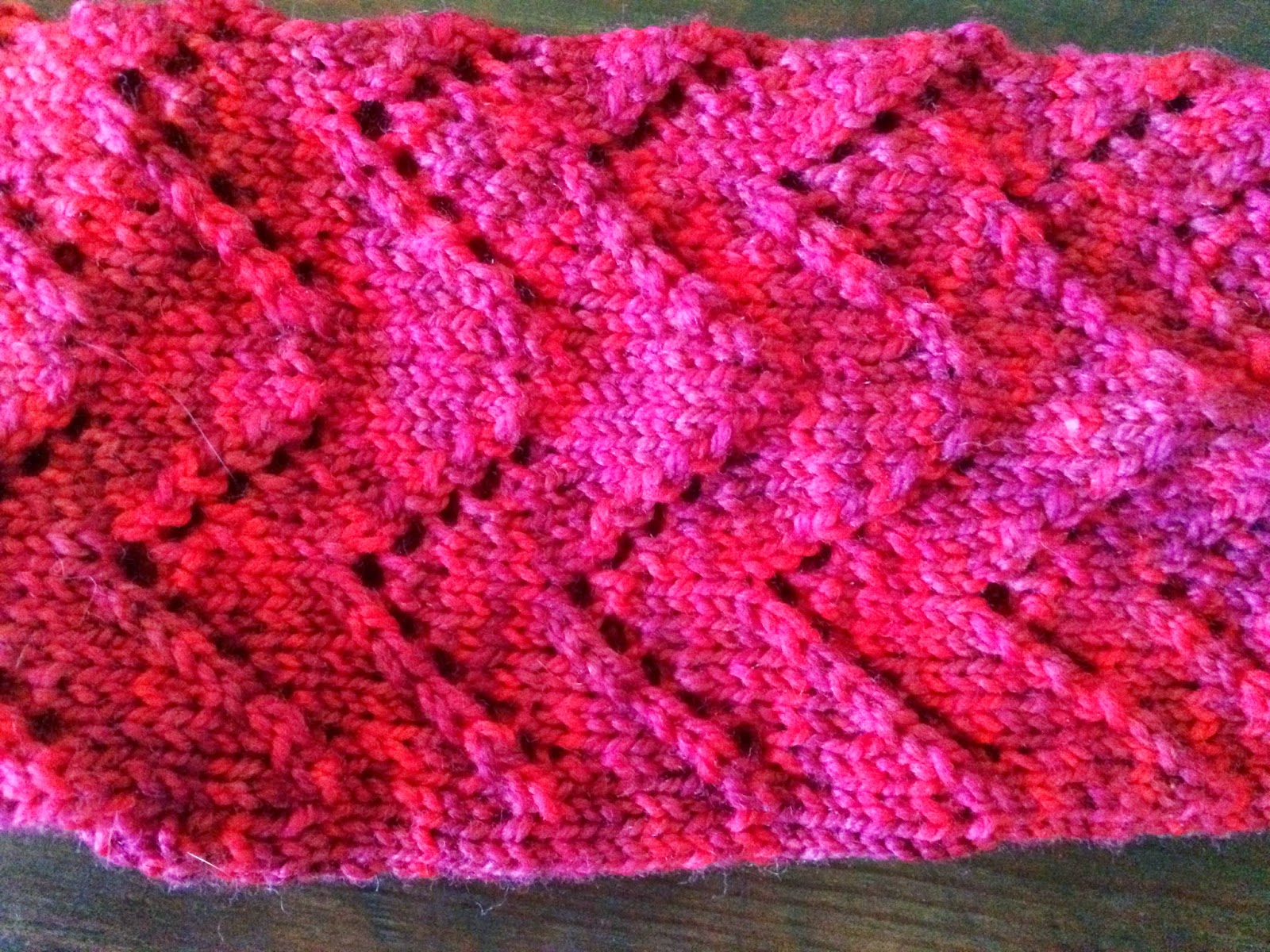