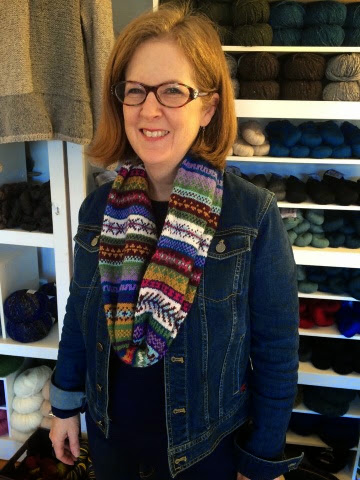 While my design and writing inspiration have been a bit stifled lately—by my work at a new large high school where classes are BIG and demands for rigor are high—I have been knitting a great deal.  Perhaps in response to daily struggles and stresses, I seem to be knitting fast and furiously and to have firmly latched onto my new-found Fair Isle fascination.  Perhaps it is the intrinsic uniformity and order of Fair Isle—where only two colors are worked in each row (perfect, as one strand can be held in each hand) and where simple stockinette stitch predominates—that are offering comfort during this stressful time of change.  I’ve finished my Vogue Knitting Fair Isle Cowl and am now over halfway through with Debbie Bliss’s Fair Isle Legwarmers.  I’ve nearly run out of “Eggplant” Liberty Wool Light yarn, though (due to my negligence in not initially seeing that I needed 100, rather than 50 grams of this color), and my yarn shop doesn’t have anymore in stock.  So I have to wait for Monday’s mail—and hope I find it in my box before I get carried away and cast on yet another project.

I’ve also done another color-work item (stripes rather than Fair Isle) in the form of the frog pictured below.  Once again, I find that my recent scattered energies caused me to make a bit of a mistake, as I used sport weight yarn from my stash (mistaking it for DK) for the light green parts and too-big size six needles, so Froggy is a bit loosely knit up making him appear somewhat primitive (although his beautiful dark mottled green head and body are worked up in Rowan fine art—a luxurious silk-and-wool blend, held double).  Since he’s a North Carolina native from a community perched on the edge of rural countryside, his imperfect appearance does lend him an appropriate rustic air.  But Froggy is about to find himself thrust out of his familiar Lake Park community, as he is taking a trip across the pond, to visit his new family in Oxfordshire, England.  (I saw the pattern for this creature in Laura Long’s Knitted Toy Tales and thought he would make a perfect gift for blogger and lover of whimsical creatures, Mrs.Thomasina Tittlemouse).


I had some blue and purple felt on hand, but neither seemed appropriate for the crown that is supposed to adorn Froggy’s head.  I meant to venture out for some yellow felt on Saturday but a dreary day and a pile of student essays to review dissuaded me.  Maybe I’ll get a crown worked up before Froggy begins his voyage; if not he’s sure to find the perfect topper in the land of fairytale kings and gleaming crown jewels.


Near his new digs, Froggy may find himself punting on the Cherwell (a river that runs through Oxford), an activity, perhaps, a bit less hazardous than dodging frog “giggers” in North Carolina.  Individuals who go frog “gigging” use long multi-pronged spears to catch their unwitting prey.  (This practice attests to the fact that the French don’t have a monopoly on viewing frogs’ legs as a delicacy, although the version served up in my locale is fried, rather than delicately sautéed and seasoned with wine and garlic.)  In his new home, Froggy might also find himself lucky enough to chance upon a real princess who can help him rise above his humble station. 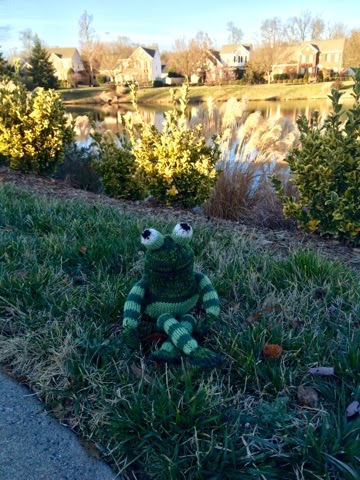 His new family might want to bestow a more suitable moniker upon him, rather than the nondescript “Froggy” hastily given to him after his eyes were stitched on a few days ago.  With the hope for a fitting name in mind, Froggy asked that I share one of his favorite poems with his new family along with any readers who plan to adopt a frog anytime soon:

Be kind and tender to the Frog,
And do not call him names,
As ‘Slimy skin,’ or ‘Polly-wog,’
Or likewise ‘Ugly James,’
Or ‘Gape-a-grin,’ or ‘Toad-gone-wrong,’
Or ‘Billy Bandy-knees’:
The Frog is justly sensitive
To epithets like these.
No animal will more repay
A treatment kind and fair;
At least so lonely people say
Who keep a frog (and, by the way,
They are extremely rare).