Spinning and the Social Network 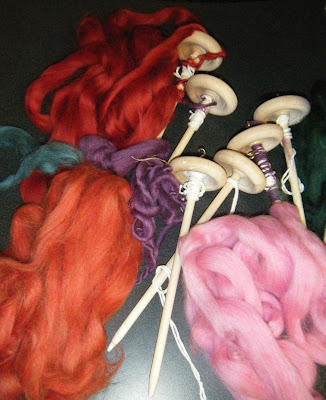 ﻿﻿While the pitfalls and dangers of online socializing are certainly real, one can’t deny that networking via the Internet opens up all sorts of positive interactions with folks who share an interest in particular niche hobbies. Last spring, I took part in a Knit and Crochet blog week competition and made a few connections with women engaged in knitting, crocheting, or spinning (or a combination of these crafts). One young woman, Ivy Mead of Pumpkin Spins, and I began to exchange comments. I followed her discussion of an impending move from Kansas to graduate school in North Carolina, and, when I learned that she would be living about an hour and a half away, I asked her via Ravelry if she would like to visit the Fiber Arts Club at my school to teach my students how to spin with a drop spindle. I’d never asked anyone I’d only encountered online to actually meet me in person, so I was a little nervous about how she would receive my request, but she expressed genuine pleasure about the prospect of coming and was able to journey to my school last Friday. 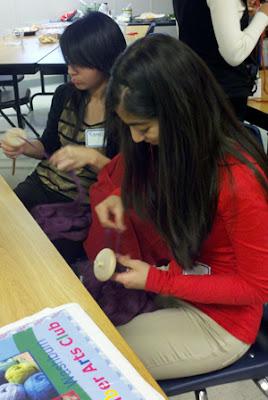 Ivy arrived on a hectic day.  The entire student body and the teachers had participated in an Angel Tree event earlier that morning, one where we had entertained over 150 kindergarten and pre-k students.  More challenging than dealing with the four-and-five-year-olds (who were remarkably well-behaved), spending two hours in a large room with 200 boisterous high school students tested both my patience and my ability to process simple information later in the day.   I’d also arrived at school early that morning to set up for Ivy’s visit.  Due to some scheduling conflicts, Ivy’s presentation had to coincide with lunchtime, so I’d decided to provide lunch for her and the girls in the club (not such an easy task as some red tape dealing with purchase orders is involved).  So, when Ivy arrived in my classroom at the tail end of a school week, she found a rather exhausted teacher and a room full of talkative, exuberant girls.


Ivy didn’t seem fazed by the situation.  She is twenty-two years old, and I couldn’t help but be wowed not only by her positive energy and healthy sense of self-possession but also by her accomplishments.  She is truly a bright young thing, and I probably overdid it in waxing poetic to my co-workers and students about this young woman, who not only has a degree from an Ivy League college, but who is now pursuing her Ph.D. in microbiology at a prestigious university while also engaging in her knitting and spinning hobbies as well as maintaining her blog.  She is also a pilot, who enjoys flying when visits her home.  Ivy is a vibrant presence who emits enthusiasm, and she gave a lively demonstration of how to use a drop spindle.  Even though our session was less than an hour long, the girls were exposed to basic principles of drafting, spinning, and parking—now they and I just have to practice.  (I’ve dabbled a bit with a drop spindle, but have probably only created a few yards of yarn that way.)
﻿

Ivy informed me that she’d learned to spin at the Webs store, which was located in close proximity to the school where she’d done her undergraduate studies.  She also told me that knitting was an effective method of “stress relief” for her when she was a student in high school.  Ivy also talked with me about her experience as a female pursuing a career in microbiology and how she would advise girls interested in science to find a way to help with scientific research while they are still in high school.  I wish I’d had more time to speak with her, as I loved hearing about her life and could also see how she could be a valuable resource for my students.  My unyielding school-day schedule didn’t allow for much conversation, however, but maybe someday Ivy and I can meet for coffee and conversation (and, of course, knitting) up in her area of North Carolina.  Even though she is much younger than I am, as knitters we share a language and culture that transcends age barriers.

For Ivy’s visit, I’d order a big box of Wool of the Andes roving from KnitPicks.  The jewel tones are rich and the fiber seems to fall in long silky strands, so much so that I imagine that it would be difficult for anyone, spinning enthusiast or not, to resist handling these fibers.  I have to confess that on Friday afternoon, when my classroom was deadly quiet and the school was virtually deserted (as teachers tend to burn rubber leaving the campus after the last class before the weekend) I selected two bunches of a particularly rich blue hue and tucked them into my tote bag of papers to be graded (essays always enjoy a change of scenery in their rides back and forth from school, even though they rarely see the light of day at my home).  At home I spun some of the blue fiber up on my wheel (an instrument which has sat long neglected for months).  Ivy’s visit was certainly an impetus to me to renew my spinning hobby, although I guess I cheated a bit by using my wheel instead of a drop spindle.

Ivy’s visit not only confirmed how my blog can help me to forge non-virtual relationships and inspired me to dust off my spinning wheel, but it also made me think deeply about the students I teach.  There are many studious young women who doggedly pursue their goals in my classes, but there are also always some who are so burdened with the stresses of financial difficulty and/or family dysfunction that it is difficult for them to achieve academically or to maintain the optimism that is often so necessary to do so.  Ivy's visit made me reflect on these students and on how I can inspire them.   Perhaps Ivy will have an impact on my students beyond the immediate and visible results of her classroom visit.