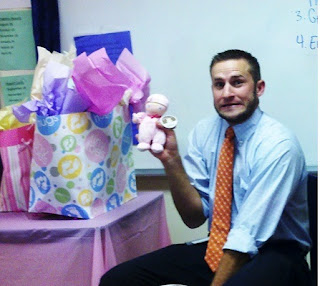 In the sometimes insanely narrow world of public education, an environment shaped by ever-changing initiatives and mandates, one filled with too many acronyms to remember properly,  a former co-worker of mine named Cindy was a breath of fresh air.  She infused her classroom with wry wit and humor—dancing a frantic Friday Dance in the hallway at the end of each week, sporting eccentric clothing (including a vintage WWII Red Cross worker’s cape and a voluminous purple tie-dyed maxi skirt), directing student plays, engaging students in massive art projects.  Cindy brought a much needed passion for learning for learning’s sake, compassion for students and co-workers, and a fiery impatience with nonsense into the school.


Cindy recalled an anecdote to me years ago that has helped me a great deal in my personal and professional life.   She was in a parent-teacher conference for a hyperactive student who was known for his over-the-top antics and struggles with academics.  Cindy told me how she’d sat in a meeting with teachers, the misbehaving boy’s parents, and administrators, a group who, in typical fashion, were wringing their hands over the litany of this student’s shortcomings that had been laid on the table.  Cindy recounted how she paused a minute and said loudly, “You’re all forgetting something.  He will grow up!”


This boy did grow up and did just fine, establishing himself with a successful career as a salesman, where his unlimited energy and talkative nature are assets.  I’ve called on Cindy’s story of this young man to help me in my dealings with my younger child (who informed me at a very young age that his “job” at school was to entertain the other students to break up the daily torture of “prison”).  I’ve also seen her statement about maturing prove itself recently, when my school hired a young Spanish teacher who is also one of my former students.  While Paul never proved to be a serious classroom disruption back in high school, his biting wit and subtle encouragement of off-task classroom debate (for two years in a row in daily classes that were 90 minutes long) could be trying.  Listening to him bemoan reading Sir "Gayman" and the Green Knight or arguing that, of course, five year olds should be allowed to watch R movies made for lively, but sometimes exhausting classes.  And the social studies project  dealing with a minor Greek goddess that he turned in to my friend Cindy might have been met with anger by a less good-natured instructor.  When he presented his project Paul discussed how this goddess was known for her "hideous ugliness" and displayed a box painted black on the inside with a photo of Cindy's face on the inside!  She'd been feeling guilty about responding to him pretty roughly with some verbal jibes the week before, so she was able to laugh at this juvenile act of revenge.


The grown-up version of this student is a fine teacher now, his pointed sarcastic humor injecting life into his classroom and staff meetings. He’s even married--to a young woman I also taught.  She was a demure excellent student when I taught her, one whose practical nature must now certainly temper her husband’s high jinx. Our school had a baby shower for the two last Wednesday, and I gave them a cabled lace baby sweater I’d rushed to complete before the party. I’m certain that as this baby grows, she will manifest some of her father’s spark of devilish humor. After all, we all grow up, but our children, sometimes much to our discomfort, remind us of our younger selves—including some aspects we’d like to forget.