Besides the noble art of getting things done, there is a nobler art of leaving things undone. The wisdom of life consists in the elimination of nonessentials.
Lin Yutang

Friday night, I impatiently worked on a rectangular piece of knitting with a large pink flower in the middle.   I was hoping to finish this item, affix it to a pillow backing, and post a pattern for it here--as well as a photograph.   I'd also initiated an unsuccessful sweater recycling project that night.  Spin-off magazine’s most recent issue contains a comprehensive article about using a spinning wheel to unravel and wind yarn from a sweater.  The results displayed in the magazine are gorgeous.  Unfortunately, the two sweaters I’d bought at Goodwill were made of yarn that stubbornly refused to unwind, so I ended up paying $8.99 for a cute set of rhinestone buttons I salvaged.


Saturday morning dawned sunny and clear.  After spending some time knitting the pillow top and making some progress on the item I am making for Subway Knits Downton Abbey exchange, I headed out in the morning  for a 9:00 a.m. haircut and to  run a few errands.  I found an incredible bargain and was able to pick up 14 sets of Wrights size 10 bamboo knitting needles for less than $11.00 total at Tuesday Morning as well as four skeins of 100% wool Universal Yarn, which was also very inexpensive.  I am planning a small "Knit and Learn" gathering at my house in a couple weeks, so I was happy to have obtained yarn and the needles for  participants to use if they show up emptyhanded.  The teenagers in my my Fiber Arts Club at the school where I teach can also use the needles.
<><>
After I scored such an incredible deal on the needles (which would cost well over $100 dollars at their regular retail price), I was feeling quite satisfied with bargain hunting skills, but the pressure I’d put on myself to stay home to work on my flower pillow hadn’t dissipated.  Despite this unfinished project looming in my mind, I decided not to go home to knit, but to go to Trader Joe's, since I was in the vicinity of this store.  For those who aren’t familiar with this name, Trader Joe's is a chain of discount grocery stores with a fun, offbeat atmosphere and lots of high quality food.   People drive from all over to buy the company’s fresh and frozen food and Charles Shaw or “Two-Buck Chuck” wines.
<><>

I parked my car in the always packed, too small lot by the small strip mall that houses the store.  When I approached the sidewalk in front of Trader Joe's, I had to smile when I saw that someone (or some people) had yarn bombed a bicycle rack in front, as well as the handle to the adjoining bread store.  The sight of the yarn-bombed items cheered my spirits immensely.  I breathed out a bit and, for the first time that day,  took note of the sunny skies and mild temperature.   Perhaps this sighting was some type of message, I mused, some indication that I didn’t need to make knitting a job with rigid deadlines on my weekends. 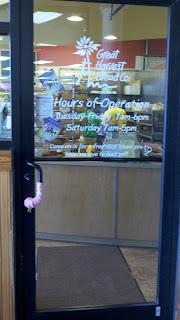 Oddly enough, I didn’t see the yarn as a reminder that I needed to get home and finish my pillow (or do laundry).  Instead, I returned home, walked over to a neighbor’s where I enjoyed several cups of tea, cooked a dinner with my Trader Joe’s purchases, and settled in to my typical relaxed evening knitting—alternating between my pillow project and my Downton Abbey inspired piece.  Thank you, Yarn Bombers, whoever you are for reminding me that taking the time to play a little bit can renew our optimism and creativity.
<><
Email Post