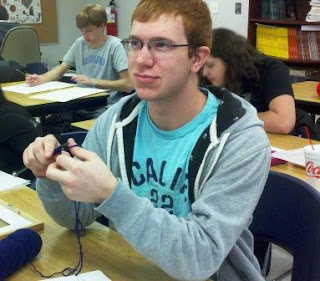 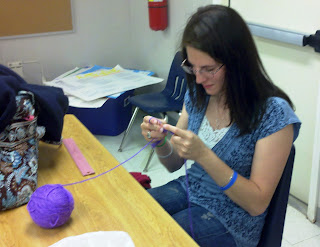 “I have to go upstairs and get the Alpaca out of the bathtub,” I said to my husband, who was busily preparing my boys’ lunches for school the next day.  My husband turned from the counter and gave me a quizzical, but surprisingly calm look.  In fact, nothing—especially fiber-or-knitting related --seems outrageous enough to ruffle him in our insane, chaotic household.  When I’d had a moment to process the apparent meaning of my words, I started to laugh.  “The alpaca fiber, I mean—I have to get it out of the tub so I can take a bath.”
This incident made me take pause.  As I rinsed and rinsed the fiber in the tub numerous times, until the espresso colored water ran clear, I ruminated on how far I had come since I first took up knitting less than three years ago.  I now had a huge stash of yarn and needles and other tools—whose combined cost could easily fund the purchase of new kitchen countertops (to replace the chipping Formica ones where my husband stood making and packing sandwiches) or serve as a solid down payment on a much-needed new vehicle.
Burdened by these guilty thoughts, as I finally soaked in the tub, I might have questioned my own sanity.  But so much knitting-related reading I’ve perused, which even includes an online quiz to see if one is truly an “addict,” continually reassures me that if I am crazy, there are plenty of other people who share my affliction.  In the tub, this thought comforted me, and I leaned back, inhaling the fragrance of lavender essential oil I’d added to the water.  (Naturally I’d scrubbed the stained tub with cleanser before filling it.)
At that time, as I stole a few minutes out of a hectic day, I realized that while my fiber and knitting interest is both an obsession and an addiction, one that no one in my household shares, I can ease the burden of feeling like a lone crazy by “pushing” my addiction onto others.   I already have the stash, and I have a bunch of young impressionable souls at my disposal.  In fact, many of these young people have approached me about my habit and about how they can take it up.
Last year I started a fiber arts club at my school.  (Read about it in the spring 2011 issue of Knit Simple.)  While I didn’t create a huge number of converts, I found one willing victim who, once she’d mastered the garter stitch, uncontrollably knitted hats in the round for the remainder of the school year.  She told me, “I can’t stop.  I’m knitting on the bus.”  Periodically I spy her creations on students at their lunch tables.
This year, I am teaching two classes of thirteenth graders.  No, they're not slow learners.  Students at my high school earn a high school diploma and an associate’s degree simultaneously, but must stay technically enrolled in high school for the entire five-year period it takes to complete both programs.  Consequently, I am teaching English IV to a group of young men and women who are for the most part working a minimum of 20 hours a week and taking four college classes simultaneously along with my course, one which exposes students to a limited overview of British literature.  After Beowulf, The Canterbury Tales,  and Macbeth, the students were ready for a break, and several of them in my third period class kept pleading with me to teach them to knit.  I began to teach a few girls in one class, so they could practice while I read Alexander Pope’s witting mock heroic The Rape of the Lock aloud to them, but then my fourth period class of 13th graders got wind of the knitting lessons, and wanted to learn, too. 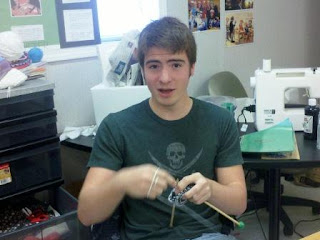 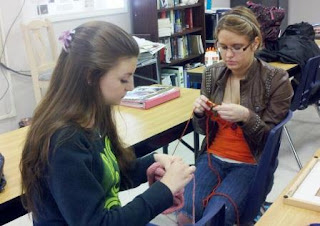 In order to not entirely deviate from the state curriculum and find myself in hot water as some kind of Dead Poet’s Society, “Seize-the-Yarn” instructor, I devised a lesson plan I named “Celtic Craft Week.”  I gathered information and materials for several projects—glass painting (to mimic stained glass), “crayon-resist” illuminated manuscripts (where crayon and paint meet and “resist” one another on the paper), and mock medieval self-portraits.  Students could complete one of those projects or create an item by knitting, weaving, or crocheting.  Not wanting to be viewed as a knitting Nazi and understanding that for some reason (unbeknownst to me) knitting might not have universal appeal, I didn’t want to force my passion on every student.  But many of them availed themselves of my instruction, and surprisingly a handful of them are males.  One male student is now beginning work on a cabled scarf.  Other students of both sexes are making hats and scarves, and the crocheters, whose craft of choice can produce more of a basic item quicker than knitting, are well into their scarf projects. 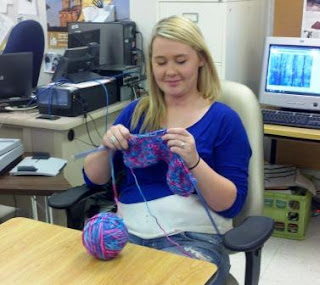 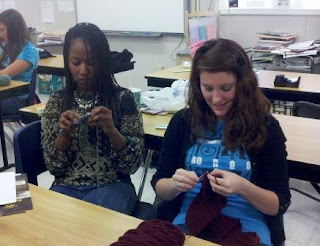 A few students have opted to use Nifty Knitters.  The other students jokingly call them lazy loomers, but these weavers seem unfazed by the playful teasing and are well on the way to completing their projects.

I have to admit some prejudice, too—a bias which I try to downplay in class. I can’t help but get excited by my newbie knitters who are so captivated by the craft. One student is knitting furiously at home while watching television, and several have purchased their own yarn and needles, rather than use the needles and yarn I’ve amassed from forays to yard sales and from culling my own stash. While the students have purchased acrylic yarn—some of it rough and unyielding to the hands-- and inexpensive metal needles, it’s amazing to see how they gravitate toward the soft wool leftovers and bamboo needles that are in my collection of classroom materials. 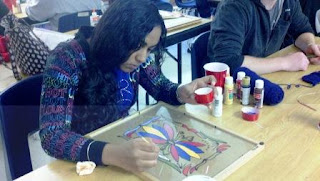 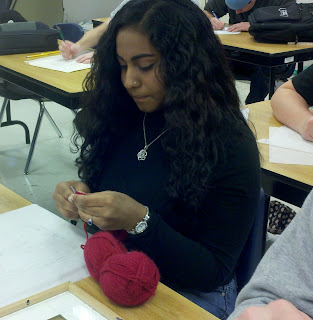 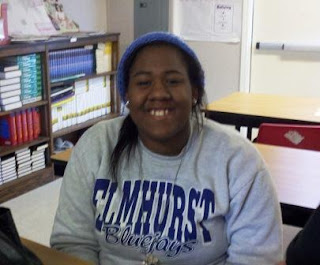 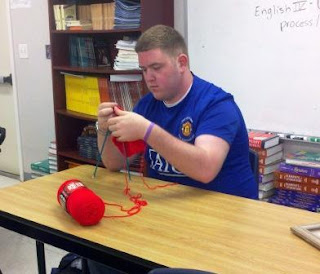 I have also shared my knitting magazines with them and tell them about possible careers as knitwear designers or in editorial work for knitting or craft magazines.  My experience with these students affirms a belief I have held for some time, that the act of creating “fabric” is somehow programmed into human beings, either through genetics or some type of collective memory from ancient times, before there were inexpensive machine-knit fabrics with which to cover ourselves.  For some people, like me and some of my particularly enthusiastic knit students, there is not only a natural affinity for the craft, but a drive to learn it well.  The addiction or instinct we share creates in us not only a natural affinity for one another but a classroom environment that is, blessedly, calm and productive, perhaps bolstering us before we forge ahead and break into our next unit, on the depressingly dystopian 1984. 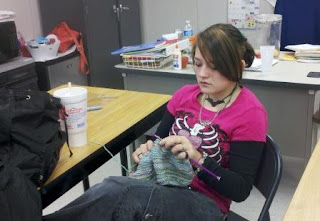